The first morning glory opened today, and sweet autumn clematis already spices the air. Blue sky after a downpour at 3:00 a.m. Lap swimming in the blue pool at 6:30!

And here's a nutty thing. Yesterday at church, one of our "elders" approached me with a quizzical look in his twinkling eyes. (At times, he resembles Santa Claus and/or is mistaken for Santa Claus by the children.) "On Thursday night," he said, "around ten o'clock, I was listening to the radio, and your voice came on, talking about a man who had no testicles." You never know what might come up at our church.

"Yes," I confessed, and told him about Paul Celan and the coincidence that he and Virginia Woolf were both poets who committed suicide by walking into rivers.

Here it is at Menacing Hedge, where you might have seen it already and where you can hear it, thanks to a taping by Bruce Bergethon at WGLT.

And here it is at WGLT's Poetry Radio, where Bruce added the ideal music, "Nutty," by Thelonius Monk by way of String Trio of New York, on Ascendant.

I've pronounced his name the way it was taught to me, the French way, I think, but in Romanian and maybe German it would be Chelan.

And here's THIS, too.

Thanks to Wikipedia for the public domain picture of Virginia Woolf by George Charles Beresford. Paul Celan's portrait is still copyrighted, but here is his grave, thanks to Martin Ottmann. You can see Celan's sad eyes here. Don't they look a lot like Virginia Woolf's sad eyes?

I have sad eyes, too, but I am mostly nutty.

And I don't put (very many) rocks in my pockets. So I plan to swim long and prosper.
Posted by Kathleen at 1:06 PM 2 comments:

Everybody keeps saying, "Summer is almost over," and, "Summer is just flying by!" What do they mean?! Isn't it just the beginning of summer still? And very, very hot?! Like summer?

I think they mean they can see the school year coming. The word "August" means school. It's true. Ack! My second bird will leave the nest on August 15. Double ack!

This junco nest painting is by Maryjo Koch, the new artist up today at Escape Into Life. Check her out! She's a painter, mother, gardener, teacher, naturalist, and cook! 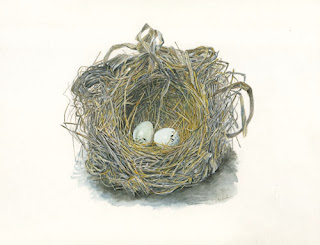 And here's a red-winged blackbird's nest.

Around here, the house wren has hatched two sets of six eggs. That's a lot of adorable hatchlings! And generations of cardinals nest here, too. Lots of whistling, singing, hopping, feeding, and flying in the back yard these days. 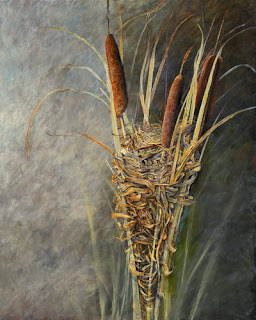 And here are some cattails supporting a blackbird's nest. Cattails? That means end of summer, start of school, fall...!

Re: Book group.
We drank wine and spoke of many things,* such as The Silver Linings Playbook, by Matthew Quick. Book and movie are quite different, but each is fun! And works!

*But not cabbages or kings.
Posted by Kathleen at 2:53 PM 6 comments: 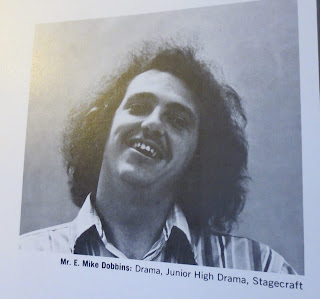 Life is beautiful. You can see how beautiful in this leaning-back laugh on the young Mike Dobbins, drama and stagecraft teacher at Lincoln East High School, Lincoln, Nebraska, in this yearbook photo from the 1971-1972 school year. He's listed in the yearbook as Mr. E. Mike Dobbins, as he is in his obituary. What does the "E" stand for?

Could it be Ernest? Here, he looks so earnest as the Drama, Stagecraft, and Junior High Drama teacher, making an important point. I want to thank Nancy Mastalir Ruder for these wonderful photographs, and for sharing the sad news with some of Mr. Mike's former high school students, who loved him. Nancy and I are blogger pals who have never met; she learned of his death here in my blog, and I learned of her connection to Mike that way, too. She lives in Texas, I live in Illinois, and both of us used to live in Nebraska (different towns), which was coincidence enough. Now this.

And a sad, sweet remembrance now of Thomas Michael Pullin, known to locals and Heartland Theatre pals as Mike Pullin or Michael Pullin. He told me once, shortly before he died, as it turned out, that no one would know who he was when his obituary appeared, as it would say Thomas. Indeed, the local paper called him Thomas Pullin. But we all knew it was him.

And Mike, Michael, E. Mike, or Mr. E. Mike Dobbins, we know it's you who's gone now.  Nice to see you standing on the left, second row, with your Dionysians at Lincoln East High School, Lincoln, Nebraska. 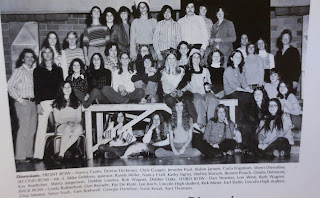 Services for Mr. E. Mike Dobbins are August 3 at Calvert Metzler Memorial Home, and you can learn about how to make a memorial donation to Heartland Theatre there or here.

I am touched that Mike Dobbins will be buried at Evergreen Memorial Cemetery, where an actor might someday bring him back, laughing, in the Evergreen Cemetery Discovery Walk. Wouldn't that be something?
Posted by Kathleen at 7:24 AM 13 comments:

He was a fun, funny, hardworking guy. We had Nebraska and Illinois in common. He directed me in my first play at Heartland, Skylight, by David Hare, in which I cooked a spaghetti dinner onstage, and we had to rig up a sink with running water. We did it.

The show must go on.

So, the show will go on tonight: New Plays from the Heartland, one-acts on the theme of "the Aha! moment." I'm feeling for Gail, his wife, and all the actors and crew who have worked with Mike in the past. It's like a "paper cut to the heart," the title of one of tonight's plays, by Terri Ryburn. I'm sort of afraid to see it. But maybe it's funny, and we'll all come together laughing. Or crying. Or both.

Who will hand out the 5-star bottled water at Heartland now?


We caved and turned on the air conditioning yesterday. Because we can get cranky when it's muggy. But the rain will relieve things, and we will probably turn it off again tomorrow!

Another cure for crankiness is humor. I hope you enjoy these funny, clever, powerful poems by Aaron Anstett, just up at Escape Into Life, and the hilarious text art by Wayne White. Hot Shots and Know-It-Alls reminds me of my own cranky humor as a failed sit-down comic, and Crapola reminds me of how I feel about so many of my failed poem drafts (especially in April, the Cruelest National Poetry Month). Aaron Anstett's poetry is, of course, not crapola.

In other Hump of the Week news, my dad is doing very well!--recovering from leg surgery, up and around and off the walker (indoors, with a "Cadillac-of-walkers" big-wheels walker for outdoor use on the uneven ground), and in a good mood. So he's over the hump. And my husband is a sexy painter. 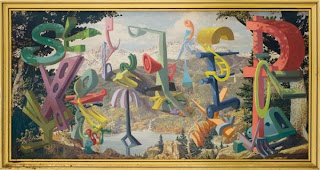 (This one is called Sexy Painters.) Not that I would ever say anything random.
Posted by Kathleen at 1:13 PM 1 comment:

Tangerine in a Silver Cup

Background music: "Tangerine," by Johnny Mercer, as sung by Frank Sinatra.  OR as performed by Herb Alpert & the Tijuana Brass on the Whipped Cream & Other Delights album, which is the version running through my head at the moment. Wikipedia reminds me that "Tangerine" was also background music in Star Trek III: The Search for Spock.  Who gnu? (Probably me, at some point.) OR, if you prefer, the Led Zeppelin "Tangerine," about a summer day slipping away to gray, as this one is.

Sometimes there's so much going on, I can't fit it all in: to a blog post, an origami brain, or a silver cup.

Anyhoo, I am celebrating Jonathan Koch, who has appeared in my blog before, and who is the current Artist Watch feature up at Escape Into Life. The painting Tangerine in a Silver Cup is already sold, but you can find plenty more at Koch's website or at the John Pence Gallery website, and, if you are in the Santa Cruz/San Francisco area, you can see them in person and attend the exhibit opening on Friday, July 12th, 6-8 p.m., at John Pence Gallery, 750 Post Street, San Francisco, CA. (Go for it, Seana!)

In poetry news, I have an "origins" essay in the new issue of Poetry East, on the genesis of my poem "Damage" from Broken Sonnets. And a poem up today in the new issue of Eclectica, "Nightfall," with cool digital--you might even say Star Trekkian--art by Adam Ferriss. "Nightfall" is in the Word Poem section, where poets used a set of words to spur new poems. In fact, "spur" was one of the words! Along with "command," "water," and, yes, "nightfall."

The next set is: question, circle, abandon, electric. Go for it, word poets! Eclectica is a friendly place, with virtual coffee. And here are some virtual oranges.