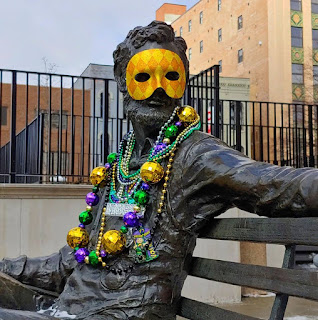 It's almost like I've given up everything for Lent and as if Lent is all the time. I am behind in my blog, poetry writing, poetry submitting, letter writing, and all things me. Except that I was in a play, so that explains my absence in January and February, 2019, but it doesn't explain anything else. Tuesday, I was downtown and saw Abe Lincoln all dressed up for Mardi Gras on Fat Tuesday. Here he is. 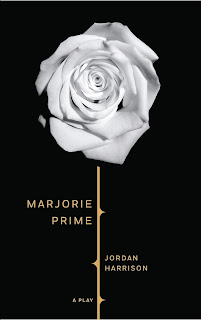 The play I was in was Marjorie Prime, by Jordan Harrison. I played a human and an A.I. (artificial intelligence) version of Marjorie (Marjorie Prime.) It was a wonderful experience--the process, the performances, the cast, the crew, the audiences, all of it! People keep stopping me to say how much they liked it, how thought provoking it was, how much they appreciated Heartland Theatre Company for doing it. So, yay! And, strangely, I learned a lot about what it is and what it means to be human. There are four characters in the play. One is A.I. throughout, one is human throughout, and two of us got to be both, and we both felt the difference. I felt not just like A.I. but, in a way, like a Buddhist. I like the play better than the movie, though the movie has a stellar cast, in case you ever seek it out. I advise seeking out a live theatre production, though!

Then I went to Chicago for four days to discuss human nature with a lovely bunch of coconuts via a wide array of readings (excerpts). We also visited the Illinois Holocaust Museum in Skokie--to ponder again what humans do to other humans--and asked questions of a survivor who is, for museum purposes, also a hologram. 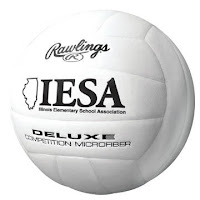 Now (again, forever) it is snowing, and I must decide whether to go out in it and for which reason: candidate forum or volleyball regionals. Sigh....

And it's not Tuesday, fat or skinny. It's Thursday.
Posted by Kathleen at 4:50 PM 3 comments: