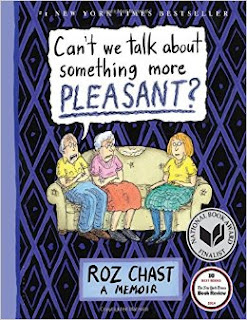 I’m on a memoir kick. I read The Art of Memoir, by Mary Karr, because I had read & enjoyed two of her bestselling memoirs, Lit and The Liars’ Club, and it was new at the library, but I got my own copy so 1) I wouldn’t deprive patrons of their chance to check it out and 2) I could write in it. So far, what I am writing in it is little checkmarks beside the memoirs I have already read in her lovely list at the back. Here is my already-read list, checked off Karr's list:

*recently re-read, as well
** from the Ongoing Library Book Sale (pity/envy me, as I am daily exposed to this…!)

Merton, Thomas. The Seven Storey Mountain. (already in my house)
Chast, Roz. Can’t We Talk About Something More Pleasant? (borrowed from the library today!)

They balance each other nicely, one being by a Trappist monk and the other by a Jewish cartoonist. One is making me laugh out loud.

May have read, but clearly must re-read:

Nabokov, Vladimir. Speak, Memory. (on my parents’ bookshelf; if I read it in my youth, along with Lolita, which I do remember, I did not “get it”)
Crews, Harry. A Childhood: Biography of a Place and Blood and Grits. 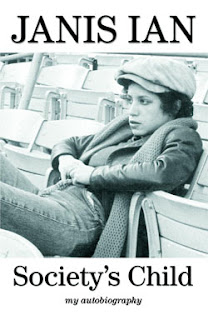 Not on her list, but I have read them:

Ian, Janis. Society’s Child.
Norris, Kathleen. The Virgin of Bennington, etc. (The Cloister Walk is on Karr’s list, but I don’t seem to have it in the house here with the others I inherited from Grif, who loved Norris.)

Plus, a bunch of actor memoirs: Helen Hayes, Gene Tierney, Diane Keaton, Marian Seldes, Susan Strasburg, Katharine Hepburn, Ingrid Bergman, Claire Bloom, Sandy Dennis, Elizabeth Ashley. Alas, I think my parents gave me some of those memoirs to try to steer me gently away from a life in the theatre, but I was stubborn, and/or to let me know what I was getting myself into.

One thing I’ve read that is mentioned but not on Karr’s list, is a memoir she refers to as basically a bunch of lies, Pentimento, by Lillian Hellman. Karr prefers Mary McCarthy. I have read McCarthy’s novel, The Group, but must now read Memories of a Catholic Girlhood, on Karr’s recommendation, and, fittingly, after Merton. But maybe a little while after…. 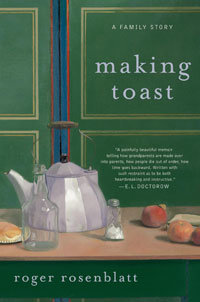 Because I am sort of a book addict/hoarder, I also purchased from the Ongoing Library Sale (the actual quarterly book sale is this weekend, and I helped to set it up in hopes of inoculating myself from buying anything) the book Making Toast, by Roger Rosenblatt, a beautiful sad memoir of a sad, sad year, the year his daughter died at 38, and he and his wife moved in with their son-in-law to help raise the kids. I am sure somebody told me about this, because when I saw it there on the shelf, I knew I had to have it. I thought it was someone from the library’s Book Talk group, but…no? Or someone from my monthly Book Club? Suzie? Or my mom, who would have read it early on in The New Yorker? I don’t know, but it is lovely.

More on memoir later, no doubt……

But for now, this coincidence. On page 28 of Roz Chast’s memoir of taking care of her parents, she provides a cartoon of her dad attempting to make toast. “Now, let’s see… You put the bread into one of these compartments… How do you know which one? Do you put the bread in first?? Or do you press this little lever down first???”

In Rosenblatt’s book, making toast is the one thing he does know how to do. (My heart is still breaking for him.)

Chast continues about her dad’s daily ineptitude (he has his reasons!): “He was bad at opening packages, like cookies or cereal. You could tell which ones he’d tried to open, because they were always torn in some strange way, as if a raccoon tried to get into them.”


Believe me, I identify. With the father and with the raccoon.
Posted by Kathleen at 9:23 PM 10 comments: