Bathsheba and the Stinkbug 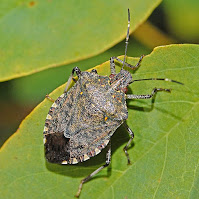 It sounds like the title of a fable, yes? "Bathsheba and the Stinkbug." But it's just a random coincidence, one of my favorite things. I'd been wanting to tell you that a stinkbug lives in our house, and how happy I am to see him, as I miss the praying mantis, who has disappeared from the houseplants--probably as a result of death, not perpetual molting. Stinkbugs, an invasive species here, often winter in houses, hibernating, or so Wikipedia tells me. (This image is by Hectonichus.) The stinkbug is known for its heraldic shield shape. 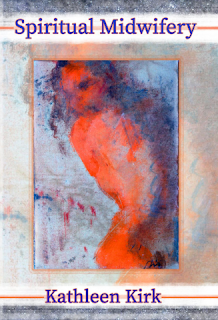 Then Facebook brought forth a memory, the cover of my book, Spiritual Midwifery, which has an image based on a painting by my husband, Tony Rio, of a woman at her bath (or that's what I see), just like the biblical Bathsheba, at her bath on a rooftop when David saw her, fell in love, and (perhaps on purpose) sent her husband, Uriah, to battle, where he conveniently died, so David could marry Bathsheba. You don't hear that name often, but my character in Life Sucks is Babs, a nickname for Bathsheba, her real name. And when I opened the new issue of Granta, dedicated to travel writing, the first article is by Bathsheba Demuth, who went to Russia to see the gray whales. What are the odds? 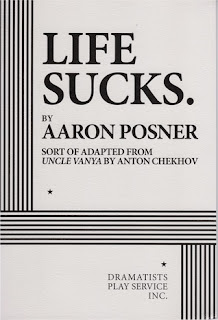 Plus, Babs has Ukrainian ancestry--Ukraine of Eastern Europe, bordering and/or controlled by Russia at various times, and still vulnerable and in the news--and Life Sucks is "sort of adapted from Uncle Vanya," by Anton Chekhov, a Russian playright, whose birthday was yesterday. The gray whales are on the Alaska side of Russia. Probably Sarah Palin, also in the news again, for eating in a New York restaurant while having Covid, can see them out her window when she goes home again. Sigh...

I noticed that the stinkbug appears when I put in the A.M. Yoga DVD, flying joyfully (it seems to me) around the room to new age music, as I do my relaxation and stretching as a warmup for rehearsal, and to calm my distracted, mourning mind, or when I take a snack upstairs after rehearsal, often with vodka--the play is full of vodka--which 1) I can't have before rehearsal but which 2) is not such a good re-hydration beverage, so I also drink water and/or Gatorade. What do stinkbugs eat? Plants and fruit, not vodka or peanut butter on graham crackers. Why is the stinkbug in my bedroom and not in the kitchen with the houseplants and fruit?

And then I discovered...the other stinkbug! There are two! But they are probably not mating. And they might both be males. And there might be more than two. Wikipedia tells me one house had 26,000 stinkbugs. Fortunately, they are happy here, however many of them there are, and they are not stinking up the place. And probably they'll go back to sleep soon. 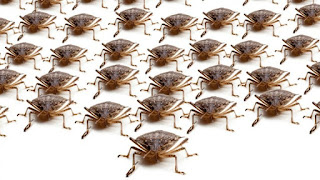 Yesterday was the memorial service for my poet friend Bill. What a lovely event, and we read several of his poems aloud. His wife and sons spoke, colleagues, and a close friend who is a retired Unitarian minister. Bill was not a churchgoing man, but he wanted her to say his eulogy. His son and grandson, opera singers, sang! Laughter and tears. Cello music. Veterans presenting colors. Masks. Exactly what was needed. Life goes on, and loss is part of it. Babs says something like this in the play. But nothing about stinkbugs. That's just me. 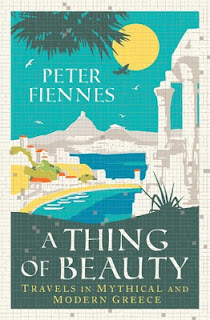 My heart keeps breaking. A friend just died, not of Covid but of Parkinson's, and though we knew it was coming, and he and his wife had time to prepare, it is still a shock and will be an ongoing sadness. Some of us mourners will read some of his poems at his memorial service later this month. You can donate to the William Morgan Poetry Award here.

Another friend feels "done." It's not quite despair but a kind of retreat into "winter blues." He expresses himself here and encourages our response, in words or the wise use of our time.

My parents are tired of the brutal cold, though grateful for the recent sunshine, as am I. They are very old: as of January 15, the same age, 89, for about a month, till Dad turns 90 in March. They have lived miraculously healthy, productive, creative, lucky lives, right up until now. More gratitude! But the end of their lives has been shadowed by this pandemic, as you can imagine, since we are all under the same shadow. Like my friend Basel, above, feeling the winter blues, I am weary.

Meanwhile, I continue to rehearse Life Sucks, a sort of perfect play for our times, given its title, and we are in that stressful time moving toward production week and an opening in early February. I am in the "What was I thinking?" stage I encounter with every play, but all shall be well, and all manner of things shall be well, do doubt.

Truly, what was I thinking? But I ran this by a counselor helping me through the stress of caregiving, and she was all for an activity that was not caregiving...which makes perfect sense. And my hope now is to float everything I am feeling and balancing into anything my character can use. Because what else can I do? Oh, read! Escape to Greece! Mythical and modern Greece, in A Thing of Beauty, a travel book by Peter Fiennes. For my downtime on the couch, cuddling under the blue fleece. 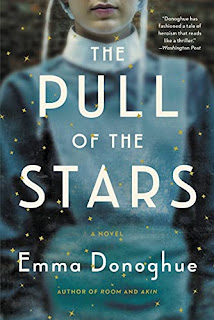 It turns out my jumbled mind has pulled itself together via the stars. I read two books recently with stars in the titles and on the covers: The Pull of the Stars, by Emma Donoghue, about the 1918 pandemic as it affects a maternity ward in Ireland, and Wiping Stars from Your Sleeves, poems by David James. Both provided quiet moments of focus on something other than work tasks, home tasks, caregiver tasks, and memorizing lines. My mind moved back into its jumble rather easily any time I slipped in a bookmark.

For example, I actually reviewed the poetry book for Escape Into Life, as David James is one of our EIL poets. I set up the post to publish automatically...on Wednesday...and then forgot about it till Friday.

Caregiver tasks included visiting my folks several times and accompanying my dad to a doctor's appointment, where I was shocked to see a woman sitting in the waiting room completely unmasked. I reminded him to keep his mask over his nose, and I was double-masking (medical + cloth), but I couldn't understand why the medical receptionists hadn't reminded or cautioned the woman. Later, I saw her in her mask, so maybe it was just a memory lapse...something I understand. I had forgotten till I read it again in The Pull of the Stars that "influenza" actually refers to the influence of the stars, once thought to cause that illness. 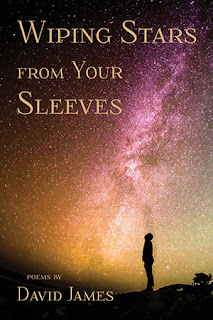 And apparently I am still drafting poems I let loose and forget about. The working titles perhaps reveal my state of mind?: "Holding Myself," "I Wept," "Forgotten Forms of Joy," "Calories from Wine." And an untitled one that might turn out to be called "Hear Myself Sing," which sounds more optimistic!

I've come out of rehearsal at night into dense fog--so fitting!--and startlingly clear skies, full of, you guessed it, stars, stars, stars! 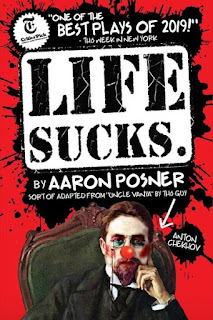 I haven’t been doing too much poetry writing lately, but one morning this week I drafted a poem called “Lying to Myself,” that sort of veered off topic as if to demonstrate the title. Furthermore, when I flipped the pages of the poem-drafting notebook, I saw that I had been drafting poems all along, just not doing much further with them. Sometimes I typed them into my computer, revising a bit, et cetera, but some just sat there languishing…

Then a friend sent me a text with a link to a New York Times article on languishing as a state of unfocused mind during Covid, not depression but also not flourishing. Yes, it clicked. Thanks, Chris! It was an article from April 2021, revisited in December 2021, and I couldn’t read it on my phone, and I hope can see it via this link, but I could read it on my computer, thanks to an electronic subscription given to me by a friend. Thanks, Scott!

It was comforting to learn that I’d intuitively found ways over the past year and a half to both comfort and focus myself, and that I didn’t have to see all my tactics as escape or avoidance but rather as real strategies to fend off too much languishing. I could create temporary “flow”—that state of time both suspended and flashing by during intense focus on a creative project or sports—when drafting even the poems I forgot (or didn’t revise or submit later). I could get steady satisfaction from small daily tasks and goals. I could, as I did, immerse myself in other stories than my own, every time I read a book or watched a movie, and I did a lot of that.

Right now, despite high Covid positivity and with plenty of safety protocols in place, I am rehearsing a play—an excellent form of distraction from the current reality that immerses me deeper in the ongoing human reality, and an excellent form of intense focus. Even if we never get to perform the play, if there’s another shutdown, this is a good thing to do. And if others get to see it, the immersion in the other human story—hilarious and sad—that will be good, too. As long as we are all vaccinated and wearing masks!

I love that the play is called Life Sucks. And that life doesn’t suck.

Posted by Kathleen at 3:36 PM No comments: