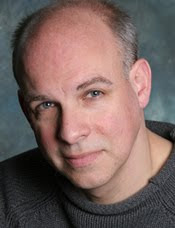 Day 96 of the "What are you reading, and why?" project, and Douglas Post, a playwright, is, naturally, reading a lot of plays! Also nonfiction, literary classics, and personal ads.

Doug spent 5 weeks in England this winter for the world premiere of Bloodshot, his one-man mystery play, commissioned and performed by Simon Slater, and well received at the Nuffield Theatre at Southampton. Doug’s play will now go on a British tour.

While he was there Doug read the plays Enron by Lucy Prebble, The Line by Timberlake Wertenbaker, and The Pitman Painters by Lee Hall. “The first,” Doug reports, “is about the rise and fall of the American energy conglomerate. The second and third are about painters and their wares. I also read About Stoppard: the Playwright & the Work by Jim Hunter, which is exactly as it sounds, and National Service by Richard Eyre, which is Mr. Eyre’s diary of the ten years he spent as Artistic Director of the National Theatre.”
Doug continued his theatre reading when he got back to the States: “I reread Stoppard’s Every Good Boy Deserves Favor, which I had seen performed with actors, dancers, and a large orchestra at the National, and Professional Foul, which is a teleplay and highly political. Actually, both scripts are political, which is unusual for this writer. I then found myself rereading Arthur Miller’s After the Fall and Tennessee Williams’s Camino Real. Both works were condemned in their time, but are now largely considered to be classics.”
Now he’s reading some fiction—The Ghost Writer, by Robert Harris. When I first saw the title, I flashed on Philip Roth’s The Ghost Writer, which I have read, but it’s a different Ghost Writer, and I see that’s a popular title indeed, and titles can’t be copyrighted.
A guy with a great CD collection, Doug is also reading some music history, The House That Trane Built: The Story of Impulse Records by Ashley Kahn. “I haven’t read anything else by Mr. Harris, but have read two other works by Mr. Kahn. One was about the making of Miles Davis's Kind of Blue and the other was about John Coltrane’s A Love Supreme. For the record, pun intended, Mr. Kahn is a wonderful writer. As is Mr. Harris.”
For those of you who are too young, a record is a round thing. You put a needle on it, spin it around, and music comes out. Trust me, Doug is funnier than I am. I just think I’m funny.
For instance, “For fun, I’ve been reading They Call Me Naughty Lola aloud to my wife and family," says Doug. "This is a collection of personal ads from the London Review of Books. Hysterical stuff.” But he’s not kidding. He really is reading that book aloud to his family!
Doug has also “started putting together this summer’s list of ‘Ten Books That I Should Have Read In School.’ Last summer, I got through seven. Wish me luck.”
Here’s Doug’s List:
Winesburg, Ohio by Sherwood Anderson
The Stranger by Albert Camus
The Big Money by John Dos Passos
Crime and Punishment by Fyodor Dostoevsky
As I Lay Dying by William Faulkner
A Pair of Blue Eyes by Thomas Hardy
Lady Chatterley’s Lover by D. H. Lawrence
Babbitt by Sinclair Lewis
Love in the Time of Cholera by Gabriel Garcia Marquez
The Fountainhead by Ayn Rand
Doug says, “I only got through D.H. Lawrence and so will start with Sinclair Lewis this summer. However, I did read Robert Fagles's translation of The Iliad this winter, so I think that counts for something.”
That does count for something! Let’s wish him luck.
And what are 10 Books YOU Should Have Read in School?
Posted by Kathleen at 7:27 AM

I just finished reading WOLF HALL, set during a period of English history about which I'm always interested in reading more. (Henry VIII and his first two wives in this case.)

I haven't decided which of several possibilities will be next.

Sheldon! How lovely to hear from you! Yes, Wolf Hall is here in this blog!

I just read "Tinkers" the recent winner of the Pulitzer Prize. A lovely book.

I think Kathleen that you are producing my play "The End of the Tour" at your theatre in Normal.

Yes, yes, I am looking forward to seeing your play, Joel, and I'm sure Julie Kistler will write about it in her blog, A Follow Spot, about the local arts community. She just returned from a theatre trip to NYC.

Yes, "The End of the Tour" is on Heartland's schedule for next year. I'm very excited to see it! Loved the play when I read it in the collection of new Chicago plays from New Dramatists press. And what a smashing idea for New Dramatists to do that kind of collection. I wish they would do it every year, to be honest. Chicago clearly has enough playwrights to make it work.

Because I just went to NY and shopped the Drama Bookshop, I am currently reading the American version of Yasmina Reza's "God of Carnage," "Speech and Debate" by Stephen Karam, and two Ayckbourn plays, "Season's Greetings" and "Comic Potential," the latter of which I will be seeing this summer at Peninsula Players in Wisconsin.

Heartland has "Woman in Mind," another Ayckbourn, on the schedule next season, along with Joel Johnson's "End of the Tour," David Auburn's "Proof" and an evening of three short plays by Jared Brown, a local playwright and retired professor from Illinois Wesleyan University. I have read all of those, too! I think it should make for a great season. Lots of juicy roles for women, especially. (Are you listening, Kathleen? You need to get back on Heartland's stage.)

I am listening, Julie, and I know I should say to Joel, "Is there a role for ME?!" the thing actors are supposed to say. I would love to audition for Woman in Mind, as there is a role for a woman of a certain age in that, but it's in the fall, my teenage daughter's volleyball season, so I will be otherwise occupied. I am very happy to be in the audience at plays and in the bleachers at v-ball games.

I think it's a bit ironic that I mentioned Winesburg, Ohio in my own recent blog post, and now am confronted with a list of unfinished books from school, so feel compelled to admit that I never finished it either. And I even like Sherwood Anderson.

I actually work in a bookstore myself, and had an interesting question from an enthusiastic customer. She had just read Wolf Hall herself, loved it, and was looking for 'more like that'. Meaning Tudor and even earlier but also very literary. I came up with a few things that were close but not really on the mark, particularly since I've read some Mantle, but not this book. Any thoughts? I told her I'd keep her in mind.

I know! I noticed the Winesburg coincidence, too. And I recently re-read Winesburg, Ohio for a Great Books event, loving it as an adult in ways I couldn't have imagined as a teenager, when I first read it.

I will ask Julie, who commented above, to come back and make some suggestions for you, as she KNOWS things!

Cool. And I will add Anderson to the infernal TBR pile.

I'm afraid the things I know that are based in Tudor times (or before) are not that literary. I'm more of a pop fic kind of person.

So maybe Ford Madox Ford, "The Fifth Queen," about Katherine Howard? I haven't read it, but I think it must be literary.

In terms of Tudor-based books in general, I enjoyed Anthony Burgess's "Nothing Like the Sun," about Shakespeare's love life, and tons of people I know love Dorothy Dunnett's Lymond Chronicles. I've also heard good things about Vanora Bennett's books, specifically "Portrait of an Unknown Woman," and Alison Weir's books. Anne Perry, Simon Hawke and Karen Harper are well-known for Tudor mysteries (and Harper has a bunch of non-mysteries in that period, as well), and my dear friend Susan Carroll writes lovely romantic historical fiction (the "Daughters of the Earth" series) with a bit of fantasy set in Catherine de Medici's France.

And there's a book called "Watermark," by Vanitha Sankaran, that has a fascinating looking cover, also set in medieval France.

I haven't read them yet, but my friend Susan (above) has recommended a mystery series (two books so far) with Shakespeare's brother as the sleuth. That would be John Shakespeare in books by Rory Clements.

Thanks! Any of these might work and I don't think I recomended any of them, although I did think briefly of the Dunnett, just because I've heard about them for so long. She seemed open but period specific in her interests if that makes sense.

I found a nice list online that offers books by Patricia Finney, George Garrett, and Margaret George as more literary novels set in the Renaissance, as well as John Updike's Hamlet prequel "Gertrude and Claudius" and Virginia Woolf's "Orlando."

The latter strikes me as a possible choice for Seana's reader, yes?

Doug may wonder why we are not talking about him, and Sheldon may wonder why I plan to mention him in tomorrow's blog entry on Irish fiction, but, hey, that's how blog comments go.

All good possibilities. I actually think George Garrett may be the closest, as I believe what she wants is something very historical, but also written by a great stylist. Not asking for much, is she?

If Doug or Joel have any one-acts hiding under the bed, or know of any one-acts they particularly like, I would love to see them. Or discuss them. Or whatever.

I recently finished "Angle of Repose" by Stegner, and not long ago "I know This Much is True" and "She's Come Undone" by Wally Lamb. Also, "The Girls of Riyadh". Also short stories by Steinbeck that have been adapted for the stage in a show I'm working on called "Pastures of Heaven" (California Shakespeare Theatre.)