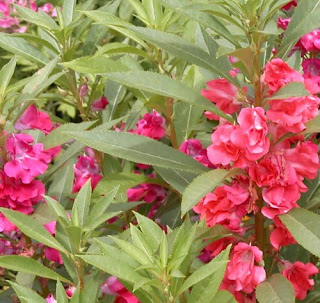 There's an "excessive heat warning" out there, so I am not...out there. I was, though, earlier! To see Sarah's Garden at the David Davis Mansion, a local historic site, with information provided by local master gardeners. When I got there, though, a perfectly reasonable handwritten sign said that no master gardeners would be on hand, due to the excessive heat.

I was free to wander the grounds alone, the sign indicated, and the gate was open. But a master gardener appeared! Thank you, Kay! And we looked at what was blooming, stood in the shade that existed, and then sat in the shade of some trees to look at a book of photos of the gardens, laid out as Sarah Davis (a contemporary of Abraham Lincoln) had arranged them, and containing original and heirloom plants: many perennials, some annuals. The gardeners who maintain Sarah's Garden harvest seeds or take cuttings--say, of scarlet geraniums--just like little old me. Or Emily Dickinson!

In Sarah's Garden, as in mine, the balsam* is compromised this year, due to the excessive heat and lack of rain. It has begun to bloom but is shorter and sparser than last year. I am hoping it will recover by next year.

Meanwhile, the crops are also suffering, and so are the people--for instance, those at the Sugar Creek Arts Festival, which I will put off visiting until tomorrow, on the strength of a hint that it might be a weensy bit cooler tomorrow.

At the moment it is 101, but it feels like 110 in the shade (also a musical, based on the play, The Rainmaker). And I was surprised to learn--from Wikipedia, of course--that "Danger, Will Robinson" was actually uttered only once during the television series Lost in Space, because I have uttered it numerous times since, and so have many others, including celebrities and characters in films. 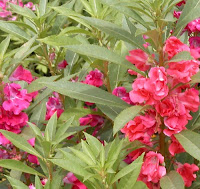 *aka touch-me-not (as the seedpods will explode!)

Holy moly! Dick Tufeld, the actor who played the Robot in Lost in Space, died earlier this year! RIP, Robot.
Posted by Kathleen at 4:00 PM

I loved watching Lost In Space as a kid, and even wrote in for a postcard signed by all the cast once. (May still have it in a box in a closet somewhere.)

Cool! If you find it, I hope it will turn up on your blog.

I love the Lost in Space trivia and am amazed that that Danger line was used only once. And thanks for the mention of Dick Tufeld. How odd that we never really thought to think of the person behind the iconic voice before. Yes, RIP.

We used to build Lost in Space vehicles and robots out of Legos as kids, long before Legos had instructions and marketing tie-ins.

I often/still feel lost in space.

I remember reading about Robby, the Lost in Space robot's older, first generation predecessor,losing his license with the AEC. Then I guess his isotopes ran down. Last I heard he was sucking up golf balls at a driving range and firing them backer at the golfers. He was good in Forbidden Planet.