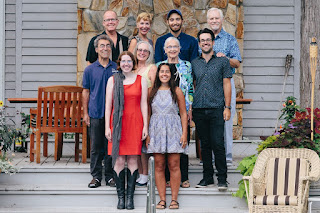 I have been back home and at work for a week and a half since an annual family wamily vacation in Michigan. We swam in pool and lake, some of us in inflatable kayaks. We read books (me), played golf and volleyball (others), did yoga (my sister), played games, and had great conversations. A time of togetherness. Here is a picture of most of us, this particular year. My son, who took the picture, is also in it, thanks to a timer. My sister's son, who was with us most of the week, is not in it, thanks to his life in the Nashville Ballet.

It has turned to August. How quickly summer slips by...

In Michigan one morning after a big rainstorm, there were tiny frogs in the pool. I swam with them, others fished them out. Back in Normal, during Early Bird Lap Swim, we early birds swam with a big frog, who stayed in two lanes, mainly, then jumped on deck, then escaped a big white bucket wielded by the lifeguard, then didn't. She carried him safely away from the chlorine pool. 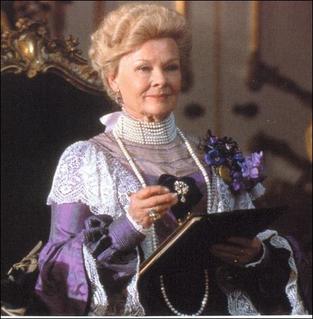 Since my return, I have been attending rehearsals for The Importance of Being Earnest, by Oscar Wilde, going up at Heartland Theatre in September. I am Lady Bracknell, no doubt closer to the Dame Judi Dench type than the Dame Edith Evans type, or the David Suchet type. (She has often been played by a man.) When I saw the costume renderings, I noticed the pearl-drop earrings and realized I have the exact pair, thanks to my mother-in-law.

Lady Bracknell is a bit of a toad.
Posted by Kathleen at 5:06 PM