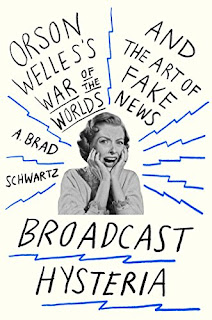 I had not intended to impose a quarantine on my blog, but many, many days have gone by since I have written here. I've been reading and writing and getting out the vote in my precinct, working, gardening, and doing a little outdoor visiting, safely, while I can. The weather has changed several times--rain, chill, return to summer--so I've done some of my reading outdoors, and I've transplanted five bright yellow mums into the ground, hoping they return, as, for me, yellow is the color of joy.

I feel suspended, at loose ends, busy, scattered. I know it is election anxiety on top of Covid uncertainty, flux, change, stasis...  I've written some small monster poems, a couple inspired by the book I am now reading: Broadcast Hysteria: Orson Welles's War of the Worlds and the Art of Fake News, by A. Brad Schwartz. I'm reading it to get ready for a broadcast of Howard Koch's radio adaptation of War of the Worlds, the science fiction novel by H.G. Wells*, coming up October 30, at 8:00 p.m. on WGLT, our local NPR affiliate station, and produced by Heartland Theatre Company. This is the famous radio play broadcast on October 30, 1938 as part of Orson Welles's Mercury Theatre of the Air,** and some people who tuned in late, after the announcement that clarified it was fiction, an entertainment, did get scared and confused, thinking the "fake news" aspect of its presentation was real news, about a possible meteor landing, poisonous gas attacks, or Martians taking over the earth. Apparently, most who heard the Martians part realized it was science fiction...but some ran out of their houses to escape, just not as many, as this book makes clear, as newspaper reports the next day seemed to suggest.

This Schwartz book is from 2015 and is firmly aware of the contemporary "fake news" problem, also situating "fake news" in history as an ongoing sensationalism-to-sell-papers thing and a more complicated and subtle freedom of the press vs regulation thing. Interesting! And fun to read about Orson Welles and his theatre, radio, film projects in this context, too.

Mostly, I am avoiding any personal broadcast hysteria by regulating what I read or watch or listen to in terms of news. Sigh... And cleaning out the basement. 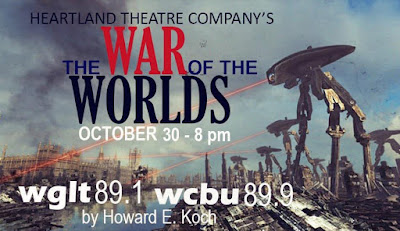 *I remember first hearing about this as a kid, from my dad, and getting the two "wells" people mixed up in my mind, which has lasted into adulthood even though I know the difference between them. Memory and the mind work in weird ways.

**I meant to say "Mercury Theatre on the Air" (not "of") but I'm correcting my typo down here (instead of up there) because I like the ethereal feel of a theatre of the air!