Right Book at the Right Time 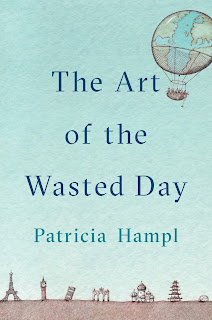 I love it when I read the right book at the right time...and when it automatically renews itself at the library for me! Right now that book is The Art of the Wasted Day, by Patricia Hampl. I'm reading it as I waste this particular day, the day after Christmas, which feels meandering and slow compared to yesterday (cooking the dinner) and the days before (preparations, small as they were, for this year's holiday). It's the right time in the sense of following upon my Laziness vs. Diligence blog entry, comforting me by affirming me in my "laziness" that is not quite that, and in my slatternly ways on a Slattern Day in the blog. 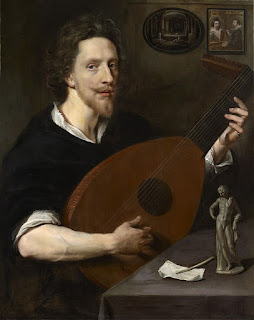 In her Prelude (brief introduction), Hampl is speaking of Michel de  Montaigne, creator/practitioner of the personal essay, whose father engaged a lute player to follow him around the house as a child, encouraging his son's imagination, daydreaming, indolence. "There was fugitive genius in this indolence," says Hampl, ultimately praising Montaigne as "the first modern daydreamer."

"He divined early the value of being sluggish, lax, drowsy..." I needn't worry about my own bouts of sluggishness! As an aware, daydreaming child, sitting under a beechnut tree, Hampl, too, committed early to "the life of the mind," her italics.

Revising my own previous worries, as someone who, like Hampl, later in life, makes relentless to-do lists, I can concur in regard to late-stage laid-backness: "This isn't sloth, it isn't laziness. It isn't even exhaustion. It is a late-arriving awareness of consciousness existing for its own purpose, rippling with contentment and curiosity. One's own idiosyncrasy reveals itself as a pleasure, without other value--but golden, amusing, integrity hard-won and now at its leisure. Hand on heart, this life of the mind, lolling--tending to life's real business." 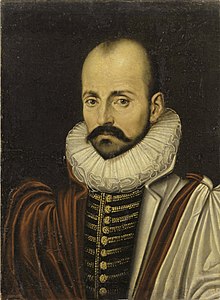 I'm comforted, too, by Montaigne's own thoughts on essayistic writing, liberally quoted by Hampl: "If it doesn't go along gaily and freely, it goes nowhere worth going." This is how I feel about my ephemeral blog writing--it goes along gaily and freely, usually composed on the spot, though sometimes I take notes--say, in my reading journal, if I want to quote something (as I have done here), and both Hampl and Montaigne are/were note takers! The spontaneity of blog writing is good because (Montaigne again) "the anxiety to do well, and the tension of straining too intently on one's work, put the soul on the rack, break it, and make it impotent." So far, my soul is not on the rack, it is not broken!

Oddly, Montaigne doesn't look all that gay and free in his frilly ruff!

Hey, maybe I have been doing it right, all these years.