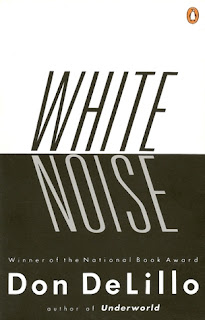 Here's another book I'd been wanting to read and happened to read at exactly the right time for me: White Noise, by Don DeLillo. I read this paperback edition, and will also show the cover provided by Wikipedia, presumably the hard cover edition. It was published in 1985, which shows how behind I am! And yet it fits our times re: consumerism, incessant "waves and radiation," and ongoing dangers from pollutants of various kinds. There is even some mask wearing, re: a "toxic airborne event."

There's also this exchange about a guy seeking danger, which frustrates the guy wishing to avoid death:

"That's right. Most of us spend our lives avoiding danger. Who do these people think they are."

This is dangerously close to my own frustration re: the adamantly unvaccinated, and I have definitely heard this attitude voiced around me! "Let them get it," indeed. Alas, they infect others also or instead. I know some who resist the vaccine have legit reasons, and some have been misled but are true believers in what they've been told by non-legit sources. Sigh... But still. 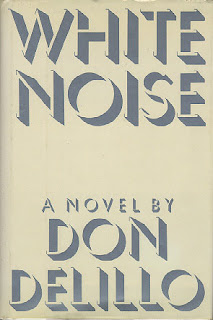 What a gorgeous holiday weekend! I did my reading outside, and today is the Labor Day Parade. The blue sky is mostly lifting my personal blues, despite the simmering frustration and ongoing communal grief. I surprised myself by submitting some poems yesterday. Others are coming out this fall. But everything still feels suspended and slightly unreal to me. It helps to prick my fingers on coneflower seeds, sprinkling some on the earth for next year while tidying the flowerbeds. I leave some up all year for the birds. Next year, it's possible the blackberry lilies and coneflowers and wild violets will take over the universe of my back yard, while lilies of the valley march down into the shared valley between houses. In the meantime, I do hope walking and gardening will undo my crankiness. For now, it's a rare Cranky Doodle Day in the blog and an actually glorious day outdoors!
Posted by Kathleen at 7:42 AM

If I recall the main character also taught Hitler Studies at a University.

Yes, he is. It's a very funny book, full of irony as well as ickiness.