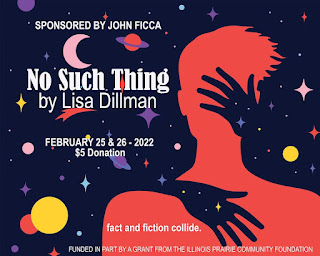 Now that the play is over, my wedding ring is back on! So, in a way, is my former life. This weekend, I'll be doing laundry, visiting my parents, and mapping out March, April, and May. Many writing, editing, programming, and wedding-preparation tasks await! This past week has been a lovely transition, as we housed a playwright, visiting to rehearse and see performed a staged reading of her play. The grant-funded playwright-supportive program is called The Play's the Thing, and this play, by Lisa Dillman, is titled No Such Thing, a lovely coincidence, making it a Random Coinciday in the blog!

A further coincidence was a reference in No Such Thing to two pretty rare first names--Bathsheba and Penelope--that were also character names in Life Sucks, the play I just finished (as Babs/Bathsheba) and the woman who played Penelope was in the audience. We laughed and hugged about that! Masked.*

In the "back on" of my poetry life, I have 1) submitted some poems 2) researched and prepared some other submissions, and 3) looked again at a chapbook manuscript I will probably submit in March. Everything feels slow...but at exactly the right pace. Meanwhile, the poetry notebook continues to fill up with drafts, including a recent one based on a nightmare (morning mare) that I call "Scary America" in my mind (and in the notebook) but which I realize was premonitory, as in one day in advance of Putin's actual attack on Ukraine, which had been looming darkly in my brain as well as the news. The dream was like a juxtposition of the June 6 insurrection in the USA if it had continued into an overthrow of our government + the Russia/Ukraine situation. I feel further and weirdly connected, as my Life Sucks character Babs was of Ukrainian ancestry. Random Coinciday continues.

*But here in Illinois, the state mandate expires as of February 28, and many places will become "mask optional," with businesses and organizations still able to continue stricter guidelines if they want. One thing I can resume, post-theatre obligations, is seeing my husband's volleyball girls play...but it will be February 28, among the unmasked...and the schools have already been mask optional for a week or so.

My transition to my former life being "back on" is very leisurely, as I notice my jammies are still on...and that's OK with me.