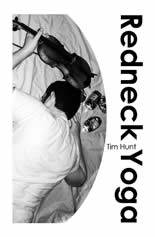 Day 271...and here is the rest of the Tim Hunt interview.  He is the author of several books, including scholarly works on Jack Kerouac and Robinson Jeffers, but the three discussed here are his own books/chapbooks of poetry Fault Lines, Redneck Yoga (just now coming out from Finishing Line Press), White Levis, and 'Til Twangdom Come.  This will be of special interest to poets figuring out how to put a book together.

You can hear "Redneck Yoga" here at the WGLT Poetry Radio page!  Read on and you'll find another poem at the end of the interview.

Is Fault Lines a book you set out to write? Or did you find yourself writing poems that linked up with each other and wove themes? Or something else? How did it come together as a book?

I stopped writing for many years, partly because the logic of what poems were supposed to be (at least as I’d learned that from my schooling) left me little sense of there being anyone on the other side of the page. To make poems seemed wasteful and empty. After a time I came to see that this was in part because I’d let myself be talked into believing that poems are things that we make—writing on the surface of a page. I realized that poetry could also be, instead, acts of speaking stored in writing—that poetry could be (in spite of the page and writing) an attempt to speak to and with other people. That’s one factor that’s shaped Fault Lines. Another was a sense that the past dies if we don’t express it, and if we lose the past (or rather some sense of connecting to a past) the present becomes terribly thin. The past is one aspect of how we orient ourselves to be fully in the present and to find our ways forward. The poem “When the Back Steps Seemed Very High” touches on this. The things we remember and find through the process of remembering are the proverbial mixed blessing, but a mixed blessing beats no blessing any day.

Can you compare and contrast it a bit with the book just now coming out, Redneck Yoga, in terms of process and content? And White Levis?

The chapbook White Levis mixes a handful of pieces that refused to braid into Fault Lines with newer poems that extend the direction of the fourth section. The chapbook Redneck Yoga is more of a veer—poems where I let my lippy inner redneck off the leash and he went off chasing squirrels and rabbits. The new book-length ms., ’Til Twangdom Come, sort of splits the difference between Fault Lines and Redneck Yoga. It’s out knocking on doors looking for a home. A main difference between Fault Lines and these newer projects is that I’m writing more quickly. I guess that’s partly a matter of trusting the process more. It’s probably, also, partly a matter of being able to focus more on the poetry, having shut the door on some other things in my life. It also seems as if I’m more apt now to see things as possible multi-poem sets. The sequence “The Further Adventures of Poem” in Twangdom, is an instance of this. When we’re first writing, especially if we draw in part on personal material, it can seem like material is precious and that it can run out—only so much ore in the mine, that sort of thing. It takes a while to learn, and to trust, that each poem can call up the next one. Poems aren’t like fossil fuel; they’re a renewable energy like solar and wind.

I love “Train Window.” Can I quote it in full in my blog?!

From the train, the clothes
lines and empty fields
are a motion, far away—
as if in black and white.

Then, through the rain spattered glass
someone is riding alongside, a bicycle—
a second motion falling slowly back,
and we are here, now.

The rain gives these gifts,
unwrapping the red
and yellow branches
to open the passing ravine,

where a pickup
noseless like a rusted skull
gleams in the skin of water.

And now I'm off on the train to Chicago, to do the release reading at The Book Cellar for Fifth Wednesday.  Wonder what I'll see out the window!
Posted by Kathleen at 7:23 AM

terrific poem.
this bit from the interview will be on my mind today "...the past dies if we don’t express it, and if we lose the past (or rather some sense of connecting to a past) the present becomes terribly thin."

To me poetry is like abstract art. My interpetation will not be the same as the author or the artist. I have a request. May I make a copy of your blog of Nov 5 and Nov 6?

Thank you for this interview Tim and Kathleen. Tim, I love the layers of motion in this poem. And I like your comparison of poems to solar and wind energy. Imagination is as renewable as it gets. As far as what happens when you leave marks by touching paper with a pen I think that it probably still is as great a mystery as early man's attempts to interpret claw marks on a tree.