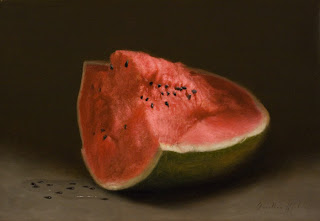 OK, it took all my concentration this morning to be a safe driver, once I'd seen that big fat full moon hovering on the horizon. I pointed it out, over my left shoulder, to my daughter, as we turned right, or east, toward her school, and then I chose the route home that would let me drive safely west, straight at it, watching it elongate (become more oblong than round), drop, and disappear. This happened rather quickly, on a stretch of rough road that takes me by the home of Chris Al-Aswad (founding editor of Escape Into Life), as part of the moon's appearance in the morning at this time of year, I hear, is illusory. It's there and not there, visible through refraction? That is, illusory at the moment of sun coming up on one horizon and moon going down on the other horizon. Tonight, look up! Tomorrow morning, arrange the routine to see as much of that moon as I can!

I also realized this morning that I'd come round in the Poetry Radio rotation again last night. Alas, I missed the cool 20-years-of-Acousticity show, with Allison Krauss as a teenager!  You can hear the poem if you want, "Married Love," as a podcast, or read it in the Love Poems issue of Poetry East, #53, which you can find here. It's also in my chapbook Broken Sonnets, as it is a "broken" (and unrhyming) sonnet about an "unbroken" (sometimes, OK, often rhyming) marriage.

And I am my own goatherd, I hope, thanks to this fine reflection by Bob Ryder, in the Reflecting Pool. Bob was reminding us at church yesterday of the vigilance it takes to remain nonviolent in life, down to not letting someone "get our goat"--that is, not letting someone provoke us into being cranky and irritable in our own actions and speech.

Bob told about a job interview, and a boss's warning about a certain manager:

“This guy seems to know how to get a person's goat,” he explained. 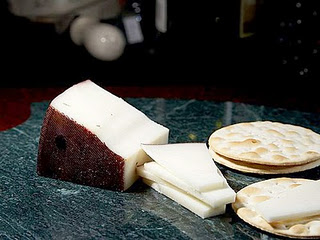 Heh heh. Bob then confessed to his own failure to leave his goat at home, and I have been known to be cranky and irritable in response to the bad behavior of others or to actual or perceived insult, offense, or injustice, so this was a good goat's heads-up for me. (Also, I had been craving drunken goat cheese on the walk to church, but that's another story, and a great excuse for the drunken goat cheese illustration again!) While I did not speak into the microphone at church about it, I had a little epiphany! I had just run into a guy who not only gets my goat but resembles a goat! And I was gentle with him, said happy new year, and wished him well. I wasn't letting him off the hook, er, the shepherd's hook(!), but I was letting him be his own goatherd, as I'm not interested in that job.

Thanks, once again, to Jonathan Koch for the watermelon, which is neither goat nor moon.
Posted by Kathleen at 10:32 AM

Do you think Jonathan might ever paint the moon? I love his work, which, to my delight, has been appearing in Every Day Poems.

Thank you for sharing your reading of 'Married Love'. I enjoyed it!

Yay, I'm glad that worked out, Maureen, and thank you!

I think this is an interesting point you make (about the goat-ish guy who gets your goat). It made me think about shadow projections--how when there is someone who really drives us crazy (maybe irrationally), there's something else at work. Though that might not be the case with this goatman.

A friend of mine wrote about it on her blog a couple of years ago--loved what she said about this: http://www.labeletterouge.com/2010/07/mirror-mirror-on-the-wall-whos-the-snaggiest-of-them-all.html

I'm also aware of when it's quite reasonable to be irritated by someone's bad behavior! It's not irrational to be annoyed by annoying people, right? I just don't want to behave badly myself in response. Sigh.... That's the dilemma. And that's what takes effort, vigilance, attention, discipline, courage, etc.

Likewise, me being nice doesn't mean it's OK for someone to be mean to me. It still isn't. But that's the other person's responsibility. My responsibility is to stand up to it and say no, not do it myself, and, all too often, get the hell out of there.

I have not been a good goatherd today; tomorrow I must try leaving my goat at home.

And now I have that song in my head, from "The Sound of Music": "High on a hill sat a lonely goatherd?"

Can it possibly be? Do I get a Random Coinciday award?

Yes, yes! Kristin, you get the Random Coinciday Award! AND the Got Me Giggling and Not a Good Goatherd Awards!

I'm late to the blogs after being back on campus today but wanted to say THANKS for this. I do have a few folks out there who tend to steal my goat(s) as well. Good reminder to be gentle in this world.

Also, so jealous re: the moon. We have had nothing but cloudcover for days and days and no end in sight!

Sandy, frankly, that moon was big enough to crush a goat.

I'm hearing a warped version of "I'm My Own Grandpa" here, about being my own goatherd. Also the Not A Good Goatherd Award is a keeper!

We are having way too much fun with this! Also, the moon tonight is like a great fat round of goat cheese!

really, not because this particular post features food a few times...but your blog nourishes and makes me hungry. and for a person who has had so little appetite for anything lately, my being hungry after reading your blog says so much for what you share and how you share it. thank you!

You, my dear, thus receive the Drunken Goat Cheese Award!