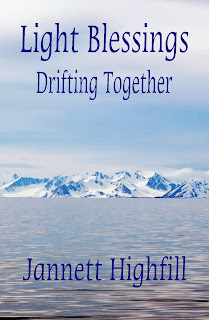 Yesterday, while we were off at the quarter- & semi-finals of the state volleyball tournament, the mail carrier brought this beautiful chapbook, Light Blessings Drifting Together, by Jannett Highfill, eagerly awaited. Jannett is a beautiful human being and poet who teaches economics at Bradley University in Peoria, and I was glad to make her acquaintance gradually over the years, as she attended the RHINO Poetry Forum when I facilitated it at the Normal Public Library. We took her work at RHINO and, since then, I was also able to feature her at Escape Into Life! Now here's this lovely book from Finishing Line Press, and it contains 2 of the EIL poems, "Deal Breaker" and "Still Married," if you want a little sampler!

And, yes, Jannett is someone I bumped into at AWP, in the Emily Dickinson session. David Baker, Carl Phillips, Ann Townsend, and Stanley Plumly looked at Emily's poems focusing on her birds, flowers, books, and obsessive topics. Fascinating! 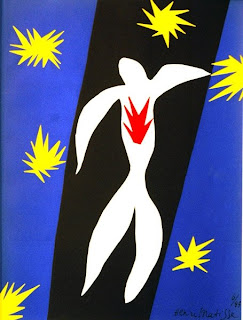 I'm over the "conference crud" and most of the AWP recap, but I will weave in other reactions and remembrances as I report on my reading. For instance, I am still reading Absence of Mind, by Marilynne Robinson, who spoke eloquently, during the Literature of Evil session, on literature as what can teach us compassion. And I will probably gush again about The Sun as I read the March and then the April issues, but I can say now what a privilege and thrill it was to hear the writers read their essays at AWP. I had read them all in advance, but here they were in the voices and with the facial expressions and emotional nuances of the writers themselves!

Likewise, it was a thrill to hear Jannett read her work at the recent ekphrasis event at the McLean County Arts Center. You can read her response to Matisse in "Still Married" at the EIL feature...
Posted by Kathleen at 9:04 AM

Who was reading from The Sun?

Sy Safransky (on writing), Frances Lefkowitz (remember that barrel of lard?), Poe Ballantine, Krista Bremer, Heather Sellers. I loved how, even though I had read the pieces, they retained their original suspense!

Kathleen, How would I know what to read if you didn't blog? I was so struck by Jannett Highfill's poems. I have decided to order her book straightaway. Thank you to paying such close attention to poetry.

Oh, that's great, Grace. I'm so glad to have pointed you her way!

Highfill's poems are gems. Thank you for the introduction, Kathleen. :)

Thank you, Jayne. It is a joy to share a poet with a reader who appreciates her!

deal breaker. what an interesting poem.

And an interesting woman!