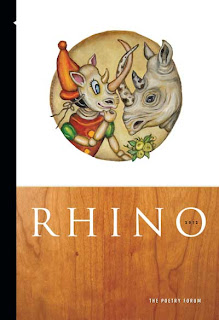 The new issue of RHINO, a literary annual, will be out very soon, followed by the reopening of their reading period on April 1, just in time for National Poetry Month! So check out their submission guidelines! And how about those adorable rhinos in love?
In my ongoing recap of the AWP Conference, I will mention that I ran into Deborah Nodler Rosen, one of the editors of RHINO, in the women's restroom! Of course! There were many, many poets, writers, and editors in the women's restroom after all events! The hotel even had the good sense to convert one of the men's restrooms, between floors, into a women's restroom! (Paper sign taped over metal plaque.)
I'm surprised I didn't run into Donna Vorreyer, someone I've met online, and who recently led an ekphrasis workshop for RHINO, in the women's restroom, too. (She reading at the RHINO Release party on April 15, I see!) Or Grace Curtis, who called when my phone was off. Most of the time it was off, or I couldn't hear it. Anyhoo, the women's restroom was always busy, and I took care to thank the cheerful, harried, overworked, overwhelmed housekeeping staff! 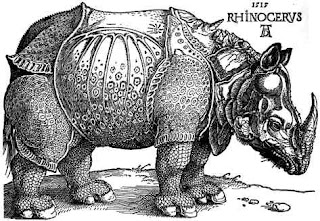 The rhinoceros is a fierce creature, lovable at a distance, in zoos, or in drawings, and constantly endangered, its horn sought as a medicine and sold in the black market. The legend is that rhino horn was an aphrodisiac, but probably it was always known for its curative potential. While it is used in making dagger handles, it is not really a bony thing, instead made of keratin, the same stuff as hair and nails, leading to this couplet from one of my nocturnes:
Which rhinoceros lends its horn
of matted hair to love?
And this armored-looking fellow is a woodcut by Albrecht Durer.
Posted by Kathleen at 7:13 AM

I was watching for you - in the bathroom and elsewhere - but we must have been on different trajectories! Someday we will meet in person!

We will! And, as random coincidii go, it's sort of amazing we didn't! But we will.

Trying too hard, probably. Next time, use The Force.

Love the rhinos, particularly Durer's conception of one.

I wouldn't normally mention this, but in the random coincidii category, I have to relate that as soon as I got off posting here, I saw that I had a plea from the International Fund for Animal Welfare, who have raised two orphaned Indian rhinos to a point where they can release them to a UN wildlife preserve in India called Manas National Park.

As they said, rhinos are a living breathing link to the prehistoric past. Glad two of them have lived to tell the tale!

Due to my bad reading, I first missed the comma and saw "who recently led an ekphrasis workshop for Rhino in the women's restroom."

Happened to me when I looked back at this, too, Cathy. I could fix, or I could keep the whimsy alive. Also, my husband's art has been hung in a gallery's restroom, so....!

It might be interesting to host a poetry workshop in the restroom - you never know!

What fun! Or a reading. Interesting acoustics.