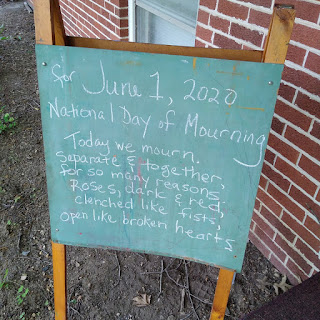 What a week. What a hard time for our country and our world. I am grateful for the peaceful protests in solidarity happening all over. I am sorrowful about the ongoing grief arising from COVID-19, police brutality, racism, hate crimes, economic inequality, global warming, pollution, and violence. Oh, my god, the list of sorrows goes on and on in my mind. 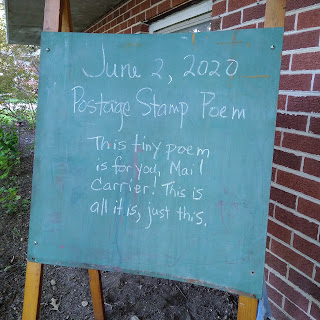 As June came up, I thought I’d write a tiny poem a day on an easel/chalkboard we had in the basement from when the kids were young, keep it out by the front stoop, take a picture each day and post it on Instagram for family and Facebook for friends, and bring a tiny bit of cheer or beauty or love to people daily, from my own skill set, when I feel helpless sometimes, or on hold, and don’t know what to do to help. But June 1 became a National Day of Mourning, so I started with that. Tuesday became our Blackout Tuesday, but I had put out my tiny-as-a-postage-stamp poem for the mail carrier already, so I just kept going. 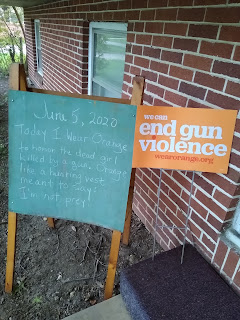 Now I am quietly protesting gun violence in America on Wear Orange weekend, June 5-6, an ongoing virtual event. We are decorating our front doors with orange; mine is sprinkled with orange construction paper hearts, my chalkboard poems, and some tiny shiny bursting boxes with orange pipe cleaners. Official Wear Orange Day was Friday, June 5. June 5 is also Breonna Taylor’s birthday. She was killed by guns in a terrible police mistake. But Wear Orange Day was created by friends of Hadiya Pendleton, dead at 15 by gun violence, back in 2013. My poem for that is hard, quick, and blunt. You understand why.


to honor the dead girl
killed by a gun. Orange
like a hunting vest,
meant to say:
I’m not prey.


Hadiya had just been in the parade for President Obama’s second inauguration and was dead a week later. 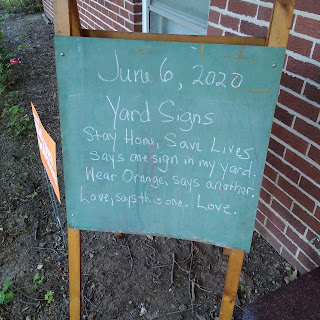 I’m wearing my orange Moms Demand Action volunteer shirt today. Yesterday I wore my coral orange work shirt to plant salmon orange geraniums in the library planters, a marvelous coincidence. And I got to wear a bright yellow safety vest trimmed in bright orange to weed along the street. My shoelaces are melon orange.

I don’t like to jump on any bandwagons, but I do wish to stand in solidarity with all our nonviolent protestors today. At a distance, masked, I attended our local NAACP/Not In My Town rally to see, feel, and be part of the local support. I came late and left early, not wanting to mingle with any crowds. Couldn’t hear or see the presenters, but felt the solidarity. My peripheral vision made me turn at the right time to see potential danger, a young white man wearing a bandana on his forehead riding a motorcycle on Front Street. My gut said, Trouble. Later, he drove through the crowd and injured people; he’s been arrested. I listen to my gut now, having ignored it sometimes in the past. After seeing him, I scanned the crowd, as well. I was looking at the young white guys, I have to confess. There’s my current bias and tendency to profile. I apologize for the past, the present, and the future. I’ll do what I can, which doesn’t seem like much, but I do vote and help get out the vote, via a tiny elected office.

And my tiny poems will continue, at least through June. If I can remember what day it is. And who I am.

UPDATE: I stand corrected! (And that surely reminds me who I am!) When I walked down to a nearby park at noon, to join other Moms in orange, all of us holding up honk-in-support signs, you know who was among the honkers? Yep, young white men! Even a youngish white man in a bandana on a motorcyle! (He was wearing his bandana as a mask.) Supporters were men, women, and humans of all ages, white, black, people of color, a surprising number of them masked while driving. There's a whole array of honking styles, let me tell you. Also waving styles. We saw thumbs up and fists up. We were all wearing masks, so we tried to send smiles with our eyes, thumbs up back, and grateful nods. A beautiful day in the neighborhood.
Posted by Kathleen at 9:01 AM