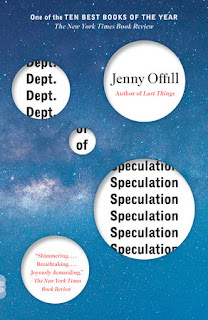 I have finally discovered Jenny Offill! For all of you who were reading her all along, isn’t she wonderful?! She writes a kind of fragmentary prose—vignettes, quotations, snippets of dialogue, prose poems, flash fictions, mini-scenes—all held together by a narrative flow/arc and a narrator’s consciousness. Gorgeous!

I started with Dept.of Speculation, about being a mom in a perfect-yet-shaky marriage instead of being a “monster artist,” as planned. The point of view is a crucial element of the story telling in this one, shifting from first to third to first again, so quietly. At one point the narrator is speculating about the phrase “wayward fog,” a state of mind to watch out for! “The person who has the affair becomes enveloped in it.” A little later, “It is during this period that people burn their houses down.”

On aging (though the narrator is still pretty darn young!): “But now it seems possible that the truth about getting older is that there are fewer and fewer things to make fun of until finally there is nothing you are sure you will never be.” 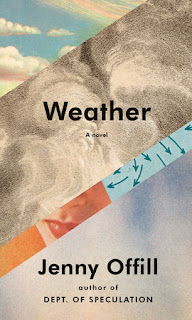 Then I read Weather, the perfect climate-change follow-up book to A Children’s Bible, by Lydia Millet, who thanks Jenny Offill in her acknowledgements! And Weather is “for Lydia”! (This Lydia?! I think probably yes.) Anyhoo, I easily connected with this one because the narrator, Lizzie, is a lot like me: she works in a library, has a “twinging knee,” and is terribly upset by the most recent presidential election, which seems to spell the end of the world.

So, yes, it’s a book about disaster psychology and preparedness—“…the superrich are buying doomsteads in New Zealand”—but it’s climate change, not pandemic, bringing on the end. With a context of 9/11. Her friend from Iran, who left right before the Shah fell, gives her insight on that: “Your people have finally fallen into history, he said. The rest of us are already here.”

The superrich retreating into remote or gated safety is a Millet/Offill parallel. In Weather, the superrich who want to go to Mars get to answer a survey question: “What will you miss most on Earth?” “I will miss swimming the most.”

I will miss swimming on Earth! The local pools are closed this summer, a good choice. Sadly, as I write, this is the Memorial Day weekend of photos posted on the Internet of vacationers crammed together on beaches and in waterparks. Oh, there will be illness and death as a result, and not just among the vacationers. Alas!

…there’s an expert giving advice about how to survive disasters, natural and man-made. He says it’s a myth that people panic in emergencies. Eighty percent just freeze. The brain refuses to take in what is happening. This is called the incredulity response. “Those who live move,” he says. 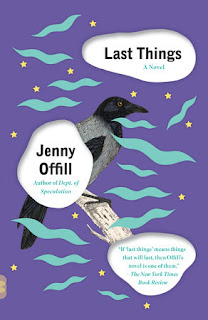 Lizzie, the narrator, is helping to answer the emails of Sylvia, a climate activist also devastated, of course, by the election and by the relentless damage that now there is no hope of reversing. She says, in a speech, “What it means to be a good person, a moral person, is calculated differently in times of crisis than in ordinary circumstances.” Oh, my, we are challenged now, aren’t we, on how to be a good and moral person. I admire so much of what I see out there, and it helps to counter my despair over the masses in the waterparks. Yes, Mr. Rogers, I’ll keep looking for the helpers.

And reading. Jenny Offill’s prose style helps. Each fragment is like a moment lived fully, then let go. It is, therefore, like a meditation.

Some years ago I saved a NYer review of Jenny Offil, and it just spilled out of a box of papers this week! Talk about synchronicity! Anywho, thanks to your blog post I have now ordered a copy of Department. Thank you!