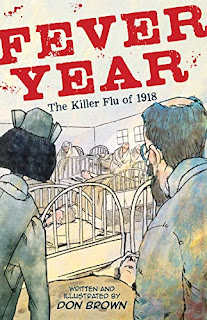 Graphic novels are a great way to receive a lot of information. That is certainly the case with Fever Year: The Killer Flu of 1918, by Don Brown. This was intentional "covid reading," so I could gauge age appropriateness of this book for a possible future Browser Pack at the library. One family had requested books on Covid-19 for kids (I don't think there are any yet), but I knew we had this. It's more appropriate for a teen than a youngster, given the amount and darkness of the facts.

This book, published in 2019, right before the current pandemic, is dedicated "to the Centers for Disease Control and Prevention, an underappreciated American treasure."

Here are the "fun facts" and, of course, not-so-fun facts about the flu pandemic of 1918, which killed more people than combat did in the Great War, known eventually as World War I:

Word origin: flu/influenza. Italians thought it came from "celestial influence" and called it ex influential colesti, which got reduced to una influenza in common speech.

"Spanish flu": The 1918 flu pandemic appears to have begun in the United States and got to Europe via "doughboys" during the war. There it proliferated and returned, affecting soldiers, the Red Cross nurses who tended them, and many civilians. When it got to Spain, it got the nickname "the Spanish flu" because Spain felt free to report on the illness without revealing weaknesses related to military preparedness. Spain did not like being blamed for the pandemic. (We know of the similar misnomer attached to the current virus.) Also inaccurately, people blamed the flu, and everything else, on the Germans. 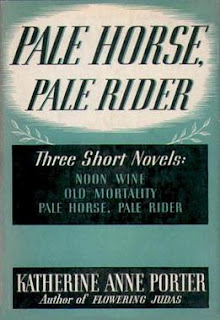 Famous survivors of the 1918 pandemic: Franklin Delano Roosevelt, Walt Disney (who got it at 16 and then went to France as an ambulance driver), President Woodrow Wilson (at a peace conference in 1919), Mahatma Gandhi, Katharine Anne Porter, who wrote Pale Horse, Pale Rider about the flu, which killed her fiance and split her life in two.

Animals: No one knows for sure where it started, but it might have been "a wild aquatic bird," whose droppings infected chickens and ducks, then people, or pigs, and then people. In the search for a vaccine, a ferret sneezed on a human and gave him the flu.

Wax: The flu virus can survive in a sliver of lung sealed in a block of paraffin. Alas!

Numbers: About a third of the world's population got infected. At least 50 million people died, probably more. The figures are estimates, and, then as now, uncertainty rules.

Masks: People fought over masks in the past, as they do now. Schools and theatres were closed. Masks kept the disease in check in some areas, and in some places masks were the law, and people were arrested for not wearing them. Imperfect use of and knowledge about masks, though, meant infection and death rate remained high. 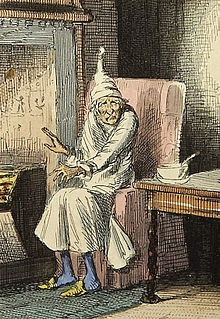 False cures: camphor & garlic necklaces, goose grease, salt up the nose, nightcaps (the kind you wear on your head), onions, alcohol and rest and mustard plasters, coal smoke mixed with sulfur or brown sugar, home brewed smelly "medicine." (We may recall similar false cures recently in the news.) So there you have it, including Ebenezer Scrooge in a nightcap (in an illustration by John Leech).
Posted by Kathleen at 4:54 PM