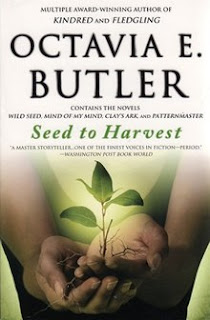 It may be a dry July, but it's got drama. Some trees and branches came down around town in a brief rainstorm today, followed by more heat, but things got watered. I love growing plants from seed, especially perennials that will drop more seed and come back next year or the year after that, according to conditions. And I collect seeds, too, to scatter where they might like to grow.

For me, this will be a summer of  reading black authors writing what they like to write. I've recently been wrapped up in Seed to Harvest, a collection of four novels by Octavia E. Butler. Wow, what a saga! It's like all of human history, and a bit extraterrestrial history on Earth, imagined side by side with how I previously "knew" it, a kind of speculative fiction before we called it that. Octavia E. Butler was known as a science fiction writer, and Wikipedia tells me she was the first scifi writer to win a MacArthur Fellowship! 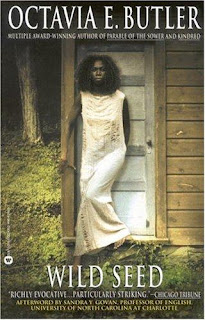 In the novels collected here, Butler's imagined history and future of humanity shows it in all its brutality, as a constant, violent struggle for dominance, sometimes eased by compassion, telepathy, and amazing healing powers. Wild Seed is the origin story, where we meet Doro, basically immortal, as long as he can feed on people and breed them for the world he wants to control. He contends with the shapeshifter Anwanyu, a woman (and sometimes a man) who can heal, who feels deeply for people, and who finds freedom and relief from human conflict by being a dolphin or a bird.

The other novels here are Mind of My Mind, Clay's Ark, and Patternmaster, the culmination of the series, but actually written first. It's not just movies that have prequels! And wouldn't you know it, along with the brutal quest for power, there was highly contagious disease. Clay's Ark brings in a virus-like illness from outer space. "And the disease organism could live on the skin for hours in spite of normal, haphazard handwashing." Back in 1984, when this came out, we weren't all watching videos on how to wash our hands, or singing songs while doing it.

"Listen! We're infectious for as much as two weeks before we start to show symptoms...  How many people do you think the average person could infect in two weeks of city life? How many could his victims infect? ...There is no cure, ...and by the time one is found--if one can be found--it will probably be too late." 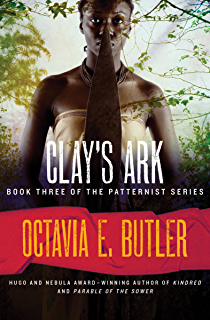 So that was pretty pertinent. Butler gripped me, that's for sure. And I was so ready for and grateful for this beautiful sentence when it came: "They held each other until they could no longer tell which of them was trembling." I admired her wisdom and patience as a writer, her willingness to leave uncertain and unfinished what can't be known or resolved, and her ability to write a satisfying ending nonetheless.
Posted by Kathleen at 9:55 PM