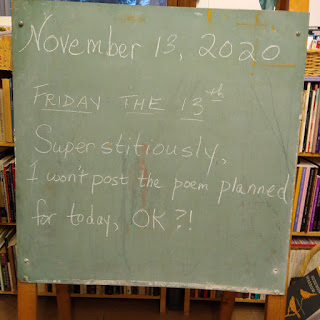 I'm a person who gets a lot done, partly by putting off some of what needs to be done. That is, if something I have to do makes me nervous, I will do a bunch of other stuff first while procrastinating. In that way, everything...and even more...actually gets done! Today, to avoid starting one of these things, I put up my sweet turquoise-colored wooden Christmas tree decorations atop the piano to make myself happy.

Superstitiously, I also put off posting a poem on my chalkboard by writing a mock-superstitious mock-haiku. No joke, though, I really didn't want to jinx anything by posting the real poem I'd been working on...and I have learned to listen to my gut.

What things make me nervous? Sometimes it's communicating about technology via technology! I'm big on communication but aware that a lot of people don't like to read emails or communicate promptly. So, mixed fear and annoyance about lack of response. Sometimes it's dread of certain people who find fault with anything I do. I know this is probably from their own fears and insecurities, but it still gets to me, hurts my feelings. Sometimes it's because if I say something like that, someone is bound to jump on me and say I'm the one in control of my own responses to other's people's negativity, et cetera, blah blah blah. I'm laughing as I type this but also annoyed!--with them as much as me, BECAUSE, to quote from the musical Company, "I'm a living thing, too, you shithead." Wow, I didn't know that was coming. I guess it's a Cranky Doodle Day in the blog! 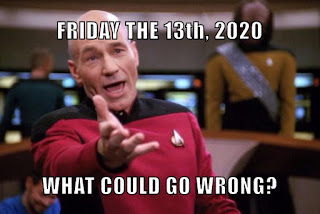 Anyhoo, the sun is shining, and it's pretty outside, though still below freezing. I'm staying in today to do all the stuff I am currently putting off. Happy Friday the 13th! As the Internet memes keep saying, "What could go wrong?" I love you, Captain Picard.
Posted by Kathleen at 10:39 AM