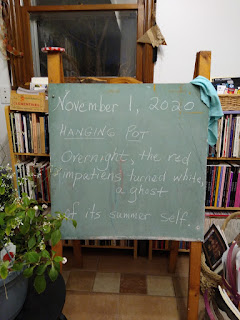 I'm back to a poem a day on a chalkboard for November, with the easel-style chalkboard moved inside to my home office. So far, though, 1) the weather has been gorgeous and warm, and I could have left it outside, and 2) a lot of my poems are about patience and waiting! 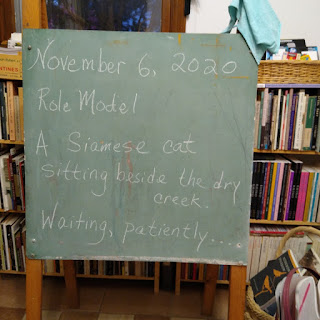 Turns out, I'm writing longer poems in my head as I walk back and forth to work, but those disappear into the bramble of my brain. I remember salient images from them, and their walking rhythms, but they are mostly gone. That's probably fine. I recall, and often use, a composing/revising technique I learned years ago of writing a draft of a poem and then not looking at it and writing it out again. Only what is important comes back!

Yesterday, freight trains came through town on both my walks. On the way into town, I saw the marvelous graffiti that gave me this small poem that started as a haiku, expanded into a double haiku (not really a thing), was briefly a reverse haibun (also not a thing) in the bramble, and eventually became two stanzas that fit on a chalkboard.

Graffiti on its box cars
gives me the finger
over and over.

I smile in the sun,
admiring the patient art
of angry artists. 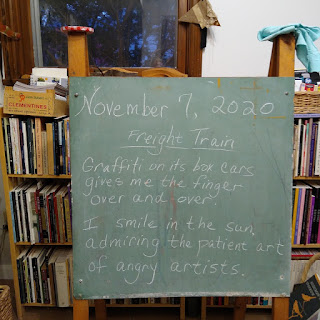 On my walk back home, I was joined at the corner by a friend on his way back to our neighborhood. We chatted, masked, for a long time, as all lights were red, waiting for the long freight train to go by. He'd been an election judge at our polling place and gave me a few more details of his day. We waited long enough to see the bad behavior of impatient drivers--turning right or left from the wrong lane, U-turn on a one-way street, driving too fast for the delayed traffic--and eventually witnessed an accident. A young woman took the right turn too fast and smashed the corner of her car into the corner of a building. She began to scream, continued screaming as she got safely out of her car, and as masked people came to help. I was calling 911, and so were several others, evidently, as by the time I got through, the police knew about it.

The train was stopped now, all crossing bars down. I could see that no emergency vehicles would be able to get through until the bars went up. The police station, blocks away, is on the other side of the tracks. Et cetera. Drivers continued to make bad choices, especially when the crossing bars went up, and they surged and turned into the path of police cars to get where they wanted to go, but finally help reached the woman, and she walked into the ambulance with two fellows helping. My friend gave a witness statement, and I chatted with a young man with a bike, who had come to work in the building she'd just hit. He had a bandage on his head from an accident that morning--bike, car--and seemed a bit befuddled, repeating his story with exact words to everyone who came near.

Walking away, I could see how easily we could have been in the driver's path. There were two white turn arrows painted on the street. One pointed to the sidewalk a few feet from where we stood, and one pointed to the building where she had crashed. These are advance warning arrows, but it was as if she had followed the second one exactly. Her car took the arrow's path, not the street. How is she doing now, that young woman? What a horrible day for her, on what a beautiful day.

I went home and collected yard signs for candidates (to return or recycle) and raked the side yard of tulip poplar leaves and sat in the back yard with the squirrels and read a book and drafted more poems and said hello to a tiny dog that had been running around the neighborhood and eventually into my back yard (where the gate is stuck open), explaining some past incidences of poop. And now I know the identity of the dog's people...the back yard neighbors down the way who curse a lot. Maybe they'll turn up in a poem someday.