Farewell to The Lost Sisterhood 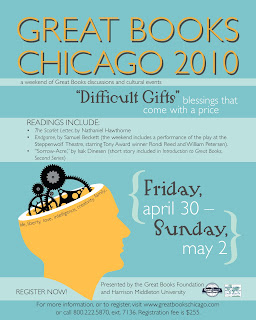 Day 79 of the "What are you reading, and why?" project. By the way, I will be gone for Days 80-82, discussing books with Great Books Chicago (pictured), but you can be sure I will ask people what they are reading, write it down, and post a three-for-one when I return.

Previously on "Wait! I Have a Blog!":
Kathleen accidentally signs up on blogger.com to comment on someone's blog. Wait! She has a blog! Months later, attempting to follow another blog, she accidentally follows herself. Meanwhile, in her day job in a bookstore, she spends her wages buying books. True, they're used, cheap,...and, wait! she has an employee discount! The point being, Kathleen sets aside for herself a book called The Lost Sisterhood: Prostitution in America, 1900-1918, by Ruth Rosen, mentions this in her blog, but has not yet completed the transaction, so it is still on the shelf behind her, when...in walks Kyle.
OK, don't worry, I'm not going to do TV dialogue.
Kyle is reading Panders and Their White Slaves, by Clifford Griffith Roe, which she was very pleased to find at Babbitt's, as it helps her with continuing research in this area. It's a book from 1910, and has been reprinted, as have other of his books, including The Girl Who Disappeared.
Roe's work is also available free online, but, like me, Kyle likes to have the book in hand and on hand. Which is why I handed her my set-aside copy of The Lost Sisterhood. She was delighted. She has read it before but keeps getting it from the library to do her research. Now she has her very own paperback copy.
Kyle is also reading Sundown Towns: A Hidden Dimension of American Racism, by James W. Loewen, which ties in to her women's studies/prostitution topic, but is primarily about the systematic exclusion of blacks from small towns, sometimes using the law and signage, and often using violence and ostracism. African Americans might visit or even work in a "sundown town," but they'd better not still be there after dark.
Back in 1909, the small town of Anna, Illinois ran all its black residents out of town virtually overnight after a crime in a town nearby. Loewen's books tracks the trend from the 1890s through the 1960s, when civil rights and fair housing activism helped change things, but, sadly, it lingers today in some areas.
After we'd chatted a while, I asked Kyle if she'd read Sin in the Second City, by Karen Abbott, about brothels in Chicago and their demise in the late 19th and early-to-mid 20th centuries. (Oops, I think I called in Sex in the Second City....sigh. Anyway, I got Karen Abbott right.) "He's probably in it," I said.
Indeed, he is. (I had just forgotten his name!) He's one of the major crusaders against white slavery and brothels in Chicago. He was assistant state's attorney when he heard the account of Mona Marshall, who told him she was seduced, drugged, raped, forced into prostitution, and held against her will, without streetclothes, until one day she threw a note out a window and was rescued. The crusade began. Roe is a key figure in Abbott's book and Panders and other works are heavily cited.
White slavery aside, Kyle and I both appreciate the complexities of prostitution as a profession. The brothels in Chicago were often run by women as successful businesses, a kind of women's empowerment. Women engaged in such entrepreneurship usually after circumstances that left them stranded and alone, needing to make a living. It's not an easy thing to sort out, and I wish Kyle well in her research project.
OK, wish me well in the Second City, where I will try not to sin while discussing The Scarlet Letter, Endgame, and "Sorrow-Acre." I'll tell you what else people are reading when I get back.
Posted by Kathleen at 6:26 AM

Have a fabulous trip to the Windy City. We will miss your singing in the choir Sunday. You know, the FFJUNC.

I am pondering volunteering to lead an actual choir called Fishnets for Jesus.

I said pondering, not pandering.

If the choir sings "I will make you fishers of men" then count me in as an alto!

James Loewen is great. I have used his book LIES MY TEACHER TOLD ME in my advanced writing classes.