Take Me Out to the Old Hoss Game 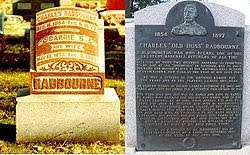 Day 57 of the "What are you reading, and why?" project, and baseball season has begun, so a man from out of town, a perfect stranger to me--he has a name, but I don't know it--is reading a stack of baseball books.

One of them is Old Hoss, by James W. Bennett, a fictionalized account of the life of baseball legend Charles Radbourn. I always think his name is spelled Radbourne, with an "e," and now I know why! It is spelled that way, on his tombstone and a plaque in Evergreen Cemetery, which is how I know him best. Every year in October, actors stand up and speak as the dead buried in this beautiful cemetery in Bloomington, Illinois, and I got to see and hear Rhys Lovell speak and spit tobacco (stage secret: Tootsie Rolls) as Charles Radbourn.
For a more factual account of this undeniably fantastic pitcher, you can read Fifty-Nine in '84: Old Hoss Radbourn, Barehanded Baseball, and the Greatest Season a Pitcher Ever Had by Edward Achorn. The 59 here refers to Radbourn's wins in his thrilling 1884 season pitching for the Providence Grays. The official scorekeeper that day actually credited the win to Radbourn, giving him 60 wins that season, instead of to Joe "Cyclone" Miller, the starting pitcher (who pitched 5 innings), but, according to Wikipedia, modern rules would give the win to Miller, leaving the statistic in dispute.
As the Achorn subtitle says, Radbourn played in the days of barehanded baseball, when even catchers caught the ball without a glove. Radbourn was called "Old Hoss" for his horselike stamina and strength, in pitching almost non-stop in that crucial Grays season after fellow pitcher Charlie Sweeney was first suspended and then kicked off the team for bad behavior (came to practice drunk, refused to leave the mound for a relief pitcher, etc.).
In his cemetery performance, Lovell incorporated this bit of Radbourn bragging, here quoted from an article about 19th-century baseball by Eric Miklich, who reminds us that Radbourn was a butcher:
"Once asked if he ever tired of pitching so often, [Radbourn] replied, 'Tired out tossing a little five-ounce baseball for two hours? I used to be a butcher. From four in the morning until eight at night I knocked down steers with a 25-pound sledge. Tired from playing 2-hours a day for 10 times the money I used to get for 16 hours a day?'”
When he retired from baseball, Old Hoss Radbourn ran a tavern and billiard room in Bloomington. As bold as he sounds above, he was apparently too shy (or too vain) to come out in public after losing an eye in a hunting accident. He entered the Baseball Hall of Fame in 1939.
Edward Achorn, who wrote the 59 in '84 book, and won a Pulitzer as a historian, was an editor for the Providence Journal, in Providence, Rhode Island, home of the Grays. James W. Bennett, who wrote Old Hoss, lived and wrote for a time in Bloomington, where Radbourn died.
Posted by Kathleen at 6:58 AM

My favorite baseball books are Shoeless Joe by W.P. Kinsella and 3 Nights in August by Buzz Bissinger. Shoeless Joe is the novel upon which the movie Field of Dreams. The book features J.D. Salinger as a character. 3 Nights in August is non-fiction and reports on a 3-game series between the Cubs and Cardinals from the St. Louis dugout. It's a gem for those of us who have grown up with this rivalry.

Actor Rhys Lovell reminds me that the actual script for his monologue was written by Jared Brown, so he's the one who incorporated the butcher/bragging!