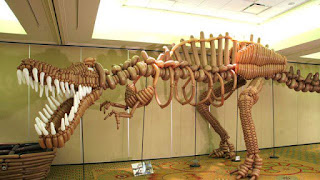 It's Evolution Sunday, and I'm glad to go to a church that celebrates it. By "it" I mean both evolution and Evolution Sunday. It's the Sunday that falls closest to Charles Darwin's birthday, February 12, also Abraham  Lincoln's birthday (same day, same year)! So today we had a wonderful reflection, and slide show, on how the hand is like the wing, etc., plus dinosaurs.

The dinosaur above is made of balloons. 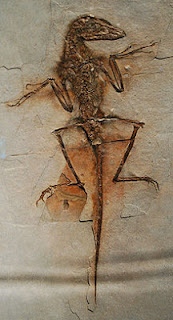 It was interesting to hear our presenter, Tasha Dunn, say, "Birds are dinosaurs," as if it were what we had always known, even while acknowledging that we've only known that for about 20 years. That is, she's younger than I am, getting her graduate degree during the time of this new knowledge and teaching students growing up inside a certain worldview. I grew up inside a previous worldview but in a century that similarly privileged scientific knowledge as the truth (even when it changes). It's an interesting tension.

Meanwhile, the new interview in The Sun magazine, with biologist Rupert Sheldrake, warns about science becoming too dogmatic! 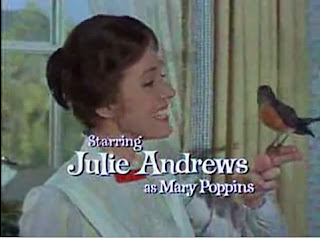 But I don't think we'll get too dogmatic in our under-standing, thanks to Tasha's fine musical-comedy take on her topic, today titled, "Elongated Fingers That Turn Into Wings--These Are a Few of My Favorite Things." And, as I understand it, though I might not be able to spell it, Tasha and her partner may have written new lyrics to another Julie Andrews song, newly titled, "Supraacetabularybipedalicmotion."

Which is, I think, how we humans walk.

Thanks to Wikimedia Commons for the picture of Julie Andrews singing to a dinosaur.
Posted by Kathleen at 2:17 PM

All in favor of archaeopteryxes say aye.

Oh, yes, Kim! How could I have forgotten the "loco" part of locomotion??!!