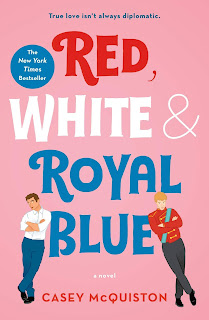 Well, that was fun! If you need a break from impeachment proceedings, caucus debacles, 2020 election anxiety, and general worry about the dire state that American democracy is in, you can read about a romance/sex scandal in a parallel American political universe: Red, White & Royal Blue by Casey McQuiston. It is very funny, very sexy, and I learned a lot. For instance, I learned on p. 288 of my paperback copy (pictured here) that the King James Bible "exists...because the Church of England was so displeased with James for flaunting his relationship with [George] Villiers that he had the translation commissioned to appease them." That's James I, and the King James Bible is my favorite translation still, now all the more so with this tidbit of info...gotten from a novel, so is it trustworthy? I hope so, 'cause it's a good one. Who gnu, as I like to ask. McQuiston knew, and lots of historians, and Wikipedia knows, acknowledging that "James's sexuality is a matter of dispute." Who cares? We got a good Bible out of it!

I saw part of the Friday debate via YouTube and New York Times video after attending local junior high volleyball. (ABC doesn't come in on my TV most of the time.) So I know that Amy got after Pete for chatting up people on the campaign about needing a break from Senate impeachment proceedings. See casual comment above that starts my blog. Mea culpa. I like Amy, and I have her hat. I like Pete, too! I really want all the current candidates to be somehow part of the next administration! What Would Lincoln Do? What Would Obama Do? That, I think. Invite everyone to the table. (Speaking of the King James Bible, that's also what Jesus would do.) But Amy is right that it's serious business, those Senate proceedings, and what responsible legislators do do! (Oops, I said "do do.") 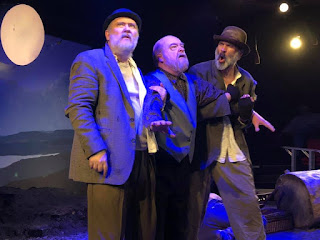 And, speaking (earlier) of Waiting for Godot on Groundhog's Day, and in Sarajevo, I saw our local production of Waiting for Godot last night. There was a full moon onstage and in the actual sky, perfect night to see it. Members of the audience who are suffering from 2020 election anxiety felt it resonating in that way! An endless, devastating waiting...for what, for what?!
Posted by Kathleen at 9:54 AM

Kathleen, thank you so much for sharing this with me! I LOVED IT!!! Please keep me on your list. Wonderful!!

Evidently, this was the Super Snow Moon. We can look forward to the Super Worm Moon in March and the Super Pink Moon in April!

Thanks for the blog post, Kathyleen, I shall share this with my friend Jane Voigts, who is a Methodist minister in Palm Springs. UMCPS is a proud member of the Reconciling Ministries Network , which means they openly support and welcome all people regardless of age, race, economic or marital status, gender identity or sexual orientation.