The Next Big Thing

Cynthia Reeser tagged me for The Next Big Thing, a blogging writer thing in which a writer answers 10 questions about a current project or upcoming book and then tags 5 other writers.  So here are the questions and my answers, illustrated thanks to public domain images at Wikipedia, and with links at the end to individual poems and the blogs or websites of those I tagged! Look for their Big Things in their blogs next week.
What is your working title of your book (or story)?
The Cassandra Poems.
Where did the idea come from for the book?
I have long identified with the mythological Cassandra.  Apollo pursued her in love, she rejected him, and he gave her the gift of truth telling, coupled with the curse of never being believed.
I’m human, so my truth is…human, not perfect, but I try to say what I see.  Often I feel not understood or not believed, so what’s going to happen happens anyway.  Sigh….  I need to work on the fate and destiny thing.

What genre does your book fall under?
It’s a set of poems, all with titles beginning “Cassandra….” in a third-person phrase.  I don’t speak as Cassandra.  I observe and render her truth and her frustration in 3rd person limited omniscient p.o.v.
Which actors would you choose to play your characters in a movie rendition?
Cate Blanchett would be Cassandra, for sure.  As a redhead.
What is the one-sentence synopsis of your book?
The mythological Cassandra now lives in 21st century America and has two imaginary children.
Will your book be self-published or represented by an agency?
It’s a chapbook manuscript, and I am sending it around, as I always do.  Possibly, in two to ten years, it will be published by a small literary press.  That’s why I am a millionaire.
How long did it take you to write the first draft of your manuscript?
Two months, September and October, 2011.  The poems came in a rush in September, a few continuing in October, when I was also revising.  Several have been published in literary magazines.
What other books would you compare this story to within your genre?
I love reading books of poems that stick with and explore historical or imaginary characters. Here are a few:
Thomas and Beulah by Rita Dove
Saint Monica by Mary Biddinger
Pinion and Figure Studies by Claudia Emerson
And The Wild Iris, by Louise Glück, poems that speak as flowers, God, times of day.
Who or what inspired you to write this book?
I was looking at cornfields in fall, and began to see Cassandra, who, of course, never actually lived in the American Midwest.  So that was weird.  The poems gushed out like blood.
What else about your book might pique the reader's interest? 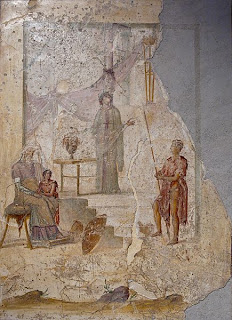 It’s hilarious.  And scary.  And there are pancakes in it.

Links to some of the poems:

4 Cassandra poems at blossombones, including
“Cassandra Reads Beowulf Aloud to Her Imaginary Daughter”

“Cassandra Goes Over the Top” at Fickle Muses

“Cassandra Stands in Front of the House” at FickleMuses

Other Cassandra poems appear or are forthcoming in Poems & Plays, Slipstream, and Spillway. Thanks to all these magazines and their editors!  And to you, for reading some of these, and my blog.  Believe me, I appreciate it! (Wait, why does Wikipedia describe the Evelyn de Morgan painting as Cassandra "at the height of her insanity"?  Insanity?!)

Cynthia Reeser
Tagged by me (more than five, in case one yes was misunderstood or a maybe):

i look forward to the cassandra pages one day on my night stand. no doubt this will be soon.

Thanks, Sherry. I wish!

Good luck, Kathleen! I much enjoyed the poems you linked to.

I have read all of these Cassandra poems online - what a stunning manuscript they will be!

Nice self interview and this was a very nice idea for a tag. I have read some of the Cassandra poems but I will check the links tomorrow to catch up on the ones I've missed.

What fun to read the Cassandra poems again. And what a great way to start my day.

Oh, Kathleen, I love these poems! Thank you for sharing them. I, too, look forward to having them on my nightstand one day.

And I, too, identify with Cassandra. Insanity? Insanity!? I think not!

Thank you all, and thanks, Molly, for defending Cassandra's sanity. In an insane world.