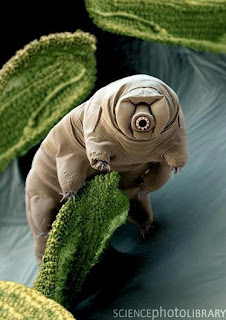 Why do I have to know that these exist? Water bears, aka Tardigrades. They're little and they like lichen. Answer (to the why question): Facebook (where this image appeared in my newsfeed) and this blog by paranormal romance novelist Renee Silvana.

So it's a cute, scary creature that reminds me of the kind aliens in some science fiction film. The Fifth Element?

If this is too creepy and freaky for you, go see the beautiful images by Margriet Smulders at Escape Into Life. Her artist feature was posted on Christmas Eve, when a lot of people were wrapped up (heh heh) in the holidays. I used some of them in "Furious Moonlight," a mini-review of Carol Berg's chapbook, Ophelia Unraveling (dancing girl press, 2012). Flowers in a watery space. 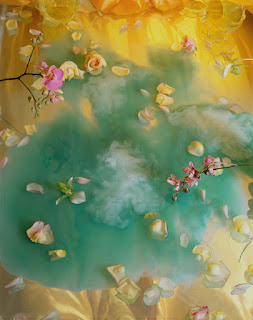 "Furious moonlight" is a phrase from one of the Ophelia poems.

Here is one of those beautiful images by Smulders, called Heaven, It's a Place, in case you need something lovelier to dream about tonight than water bears.

I don't know, though. Ophelia stills drowns...
Posted by Kathleen at 11:34 AM

I like lichen. The water bear has a Lego nose.