It's the Twelfth Day of Christmas, by some accounts, and Epiphany Eve. I hope I have an epiphany tomorrow.

My husband used to get his presents, in his shoes, tomorrow, January 6, on Three Kings Day. We expect to be snowed in tomorrow, or homebound due to bitter cold and the windchill factor, and since we did not hoard groceries in advance, I hope I have enough imagination to make meals from what's at hand.

The traditional food would be a cake with a bean and a pea in it. I have some beans. Or I could bake a King Cake with a baby Jesus in it. Not happening.

Instead, I offer this interesting account of Twelfth Night, or What You Will, Shakespeare's play performed as it would have been, in Shakespeare's time, with men playing all the roles. It's a production of Shakespeare's Globe in a limited run at The Belasco Theatre in New York, starring Mark Rylance and Stephen Fry. I'd love to see it.

I was in Twelfth Night in college, as Olivia, and in Chicago, with the Steppenwolf Second Company (doing Shakespeare for school groups), as Viola. I was a better Olivia. I'd been instructed in a convoluted rationale just to speak in my regular voice, as a boy would have been playing Viola/Cesario before his voice changed, but I'm not very deep-voiced naturally, so it could hardly have worked. Sigh... Plus my twin (Sebastian) was way taller. I think back on what would have been the more natural casting and wonder why we didn't do that! 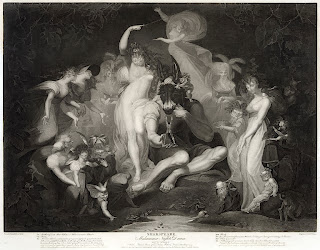 Oh, well. I got to play two cool Shakespearean roles + all the women, at one point or another, in A Midsummer Night's Dream, not to mention a variety of fairies. What a nice life.
Posted by Kathleen at 9:39 AM

Sigh!!!! I bet you were wonderful in all the roles you had a chance to play act. My extensive back ground in theater came in only two major productions: King and I (prince shula long horn) and Kiss me Kate (one of the thiefs) Played both in different nights.

That was a thoughtful review of the play. It is hard to recreate Shakespeare as it would have been done originally.

I saw an all female Hamlet a couple of years ago. That didn't really work either. It wasn't bad, just not great.

Hope you got to see 12th Night on Broadway -- we saw both 12th Night & R III the same day. They were both amongst the very best I've seen of both (and I've seen alot of both). 12th Night is available on DVD from the Globe, pretty much same cast & production except Samuel Barnett is Sebastian in the DVD (Viola on Broadway)