Tuesday was a two-interview day, and today is a three-poem day. On Tuesday morning,* I was interviewed by The Columbus Dispatch about the upcoming production of Claudel at Columbus Dance Theatre, in the intimate Fisher Theatre. (Last year's Cleopatra was in the larger Lincoln Theatre, with its very appropriate Egyptian ornamentation.) What an unexpected delight in life, the chance to work closely and in a variety of ways with a dance company!

I had the occasion to spell the word "Niobid" for the reporter, and I had learned what it means--a child of Niobe--in my research on Claudel. Now this poem, "Wounded Niobid," appears in Electica, with two others written in the voice of Camille Claudel, who sometimes inhabits the voice of a character in her sculpture. In this case, there's a doubleness; pierced in the heart, she feels her connection to a daughter of Niobe.

As the poem details, sometimes Camille Claudel, like other sculptors, re-used figures from one sculpture in another. The Wounded Niobid is the female figure from Sakuntala, who leans on her lover in a reconciliation scene in that grouping.

Like me, Camille Claudel loved the water. Swimming was good exercise for her, but she also liked walking, despite a mild limp. I appreciate the coincidence of her "clay foot," as she was noted for her fine skills modeling hands and feet in clay while a student of August Rodin. 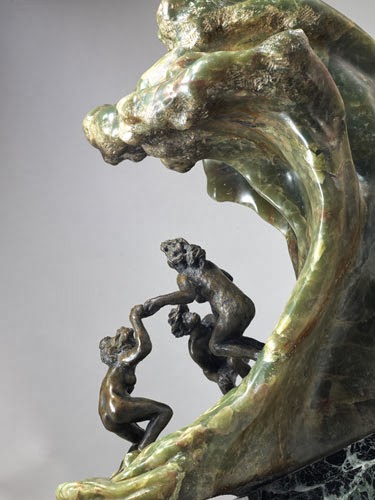 And I love The Wave, her sculpture of three women under a huge wave that might overwhelm them. She was a fan of Japanese art, so I imagine the wave in Japan. If the women are lost, 1) first they had that glorious rush of water 2) they are like the children of Niobe, who all perished, as punishment for their mother's pride in them.

Looking forward to reading the whole issue of Eclectica, and I've already read the short short "Consensus" by Laurence Klavan, who makes it a marvelous Random Coinciday by being the twin brother of Escape Into Life theatre reviewer Scott Klavan, who claims he's much better looking. Who gnu?

*Tuesday afternoon was a job interview, so wish me luck!
Posted by Kathleen at 1:52 PM

What a marvelous sculpture 'Wave' is.

Wonderful poems. Congratulations on their publication.

I agree with Maureen, about the sculpture and your poems. Beautiful!

(and good luck about that interview...)

Thanks, Hannah! Hoping to see you in Columbus. Friday night is SOLD OUT but there are still tix Saturday for matinee and evening performances!

Wishing you luck on the job interview!

Thanks, dear Collagemama. 1) Jobs are good! 2) There's a poem in my new book titled "Collage"! As you well know.

loved the three poems your featured in 'Electica'

these three statues are so beautiful

good luck on your interview

you are one busy young lady

It's always nice to be called a young lady. Thank you, Nene!

I see that the movie about Camille Claudel is coming to the Gene Siskel Center in February. I'm looking forward to learning more about her. Beautiful poem.

Thanks so much! Yes, I am looking forward to the film, too. I love Juliette Binoche, and I have been channeling Camille Claudel. (I might explode.)