A Body of Work 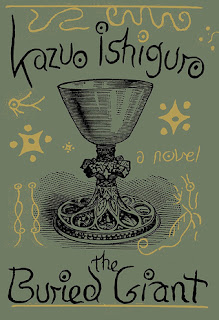 Ever since Kazuo Ishiguro won the Nobel Prize in Literature, I have been reading his work, checking out his books from the library. I started with When We Were Orphans and then went on to The Buried Giant, the most recent, which takes place in a sort of Beowulfian/post-King Arthur world where the Britons have been in conflict with the Saxons, until they forgot about it. But what will awaken their memories?! It was a slow-moving, page-turner of a book--how do those two things go so well together? that is the mystery of Ishiguro, perhaps!--with a final moment worth waiting for. A book about memory, vengeance, war, and idealism, it made me very sad. 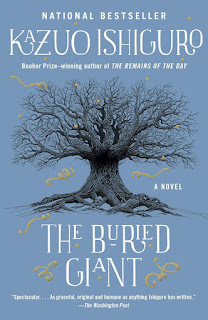 Fantasy is OK, but, frankly, I prefer realism...or, as in the case of The Unconsoled, surrealism, which is like a very long, pretty bad dream, but, as before, I was gripped and could not stop turning the pages. This one struck me as human and true and heart breaking. A guy comes to town to play the piano--he is a famous musician--and gets wrapped up in the lives of the townspeople, or as wrapped up as he can, given his own character, which resembles that of certain other characters in the novel. This one, too, made me very sad.

I wrote down many sentences. Here, the main character is recalling a moment when a classmate sought to console him in the past: "For one thing, even in my state of self-pity, I had been able to recognize the remarkable generosity he was displaying, and had felt a profound gratitude. It was also at that moment I had first realized, with a distinct chill, that there was another side to the school golden boy--some deeply vulnerable dimension that would ensure he would never live up to the expectations that had been placed on him." This is a moment of great insight into the other person's character, without the narrator 1) recognizing in himself the same thing going on and 2) being able to reciprocate in empathy, in the past or in the present. See the sadness? 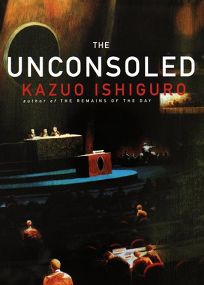 Here, too, speaking to a child (who seems to vary in age), the narrator speaks wisely of regret without (quite) seeing in himself the same vulnerability to it: "And you see, once you miss it [your big chance], there's no going back, it would be too late. It won't matter how hard I travel afterwards, it won't matter, it would be too late, and all these years I've spent would have been for nothing. I've seen it happen to other people, Boris. They spend year after year travelling and they start to get tired, perhaps a little lazy. But that's often just when it comes along. And they miss it. And, you know, they regret it for the rest of their lives. They get bitter and sad. By the time they die, they've become broken people." 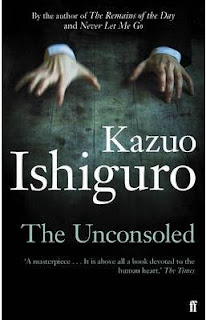 While it's not the kind of plot to which you attach the word the word "spoiler," I don't want to say too much about Miss Collins and her speech near the end of the novel, but I will quote her on this: "Me, the music, we're neither of us anything more to you than mistresses you seek consolation from." This is crucial since the title is The Unconsoled, and we do seem to be in the land of the unconsoled throughout the novel. In it, people do offer each other various consolations--words, food, drink, hospitality, advice, practice rooms....  Ah, but as one character puts it, "I had certain plans then, such as you do when you are young, when you don't realize there's a shell built around you, a hard shell so you can't--get--out!"
Posted by Kathleen at 1:15 PM

The library DVD of "Remains of the Day" has disappeared.

I loved The Unconsoled. Thanks for reminding me of it.