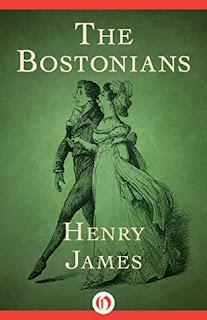 I am creeped out. What are the odds that I would read two books in a row that contain a character named Ransom? Granted, in one, The Bostonians, by Henry James, Basil Ransom, is a major character, and, in the other, Aiding and Abetting, by Muriel Spark, Roy Ransom, a detective, is merely a mentioned character. (And his name might have been "Ranson," as it was printed the second time he was mentioned, though that might have been a typo. Or was it an intentional mistake, as he was mentioned in a character's notes, to lend verisimilitude. But does that happen? I found it weird.) And I did not read this particular edition of The Bostonians, but I liked this particular couple. They look ghostly or like they are made out of Hollywood ectoplasm, adding to the creepiness of it all. I read instead an edition with a good introduction by A.S. Byatt and excellent footnotes at the back, so I read with two bookmarks, to keep track of them. 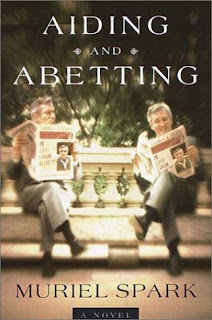 The Bostonians is creepy as Ransom, a Southerner, not too long after the Civil War, is sort of stalking a feminist from the North (Boston)--or rather a lovely young woman with a talent for public speaking, who can be used by the feminist movement of the time. It was particularly creepy reading it in our times, in the context of the current prolonged backlash against feminism and the resurgence of Confederate flags and related controversies. And now I do want to see the movie with Christopher Reeve as Ransom, to ponder his charm, though I read the book casting the remake in my head, and Ransom was played by Adam Driver. Henry James describes Adam Driver's long, thrown-back hair, I kid you not. Creepy. 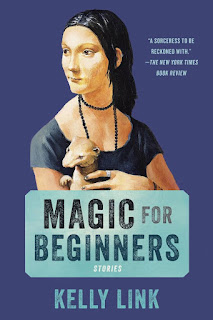 It is October, which adds to the creepiness. Now I am reading Magic for Beginners, a bunch of surreal short stories by Kelly Link. I just finished the story with many rabbits in the yard, so, if you have read it, you know why I am creeped out. Not only by the story, but also because my yard is full of rabbits, too, as we don't spray lawn poison, and I leave plenty of things in the yard for animals, birds, squirrels, earthworms, and insects to eat all year long. I mean seed heads, vegetable compost, and bread crusts. 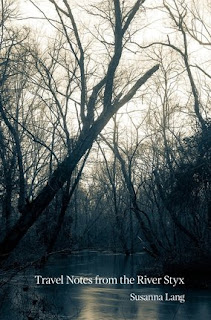 And up this month at Escape Into Life is my review of Travel Notes from the River Styx, a book of poems by Susanna Lang, that is sort of a dreamy road trip in the Underworld. You can read it here if you want more creepiness! Meanwhile, the annual Evergreen Cemetery Walk continues in Bloomington, Illinois. I wrote a couple of the scripts for it, and the actors are doing a great job. The unifying theme this year is World War I, as this is the centennial of the USA's involvement in that sad, sad war. The ghosts of soldiers, Red Cross nurses, and hard-working, generous people of our community do walk again....
Posted by Kathleen at 9:12 AM

Also, the first story in Magic for Beginners references Boston!!