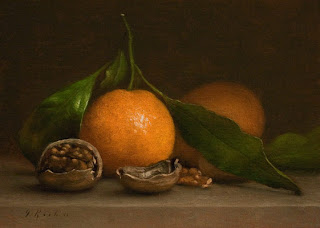 Who knew I'd be telling a childhood knock knock joke in my blog on the morning of our 22nd wedding anniversary? 22 years married + 8 courting = 30 years of togetherness.

On this day in 1989 we headed downtown to the courthouse to be married by a judge who looked a lot like Abraham Lincoln. Our friends Gary and Pat came as witnesses, and then we went over to the Walnut Room at Marshall Field's for brunch beside the gigantic Christmas tree. 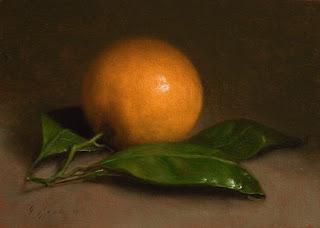 A week later they joined us at home, at my parents' house, for a small family ceremony that led also into the celebration of Christmas. Tony's mother came up from Miami, and his brother's family came over from Missouri. My sister's family arrived from Ohio and my brother's from California. Quite a year.

There's a banana joke in here somewhere, but I'm thanking Jonathan Koch for the mandarin and tangerines.

Knock knock. Who's there? Orange. Orange who? Orange you glad we got married?
Posted by Kathleen at 7:15 AM

Happy anniversary, Kathleen, to you and your husband!

Thanks, Hannah! I am glad.

what a restorative post! such warmth and good will radiating in every direction. many blessings to you both.

I remember the husband of my moms' friend (and my friends' mom, I guess?) poking fun at me cus I got the banana and the orange reversed in that joke. It was along the lines of "Hey! A new joke!" Heh.

Thanks, Sherry! And marriage surely needs plenty of warmth and, if it's going to hold up, restoration. Sigh...

Happy Anniversary! Knock, knock. Knock, Knock who's there!! Knock, Knock. Who's There? Orange you glad I didn't have the Kim Kardashian longevity?

I'm hope you're not offended by mi using my native language

Thanks, all, for the good wishes. I see the emails came in at odd, staggered times, so I am out of order in my thanks!

I hope you all find the love of your life if you are looking. It is a lucky thing.

What a lovely post. Congratulations to you and Tony!

Thanks, Paulette! And you are all making me feel cozy. So is Tony...well, now he's off to volleyball practice. But later? Champagne!

Congratulations on your anniversary Kathleen. I hope it was lovely. I do love the Jonathan Koch paintings you use. They are lush, bright and there's something affirmative about them.