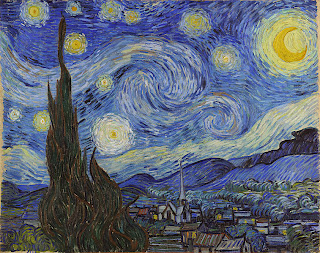 Last night we took our daughter back to college after a weekend visit home. Our son had visited, too, so while we were driving south he was driving north, back to his apartment in Chicago. We were all under a clear sky on a beautiful starry night. Bright and early the next morning, our daughter went to class, our son went to work, and we parents were empty nesters again, on a Blue Monday in the blog. But grateful and oh, so glad for the joy of the visit, the beauty of the night.

Our kids were tickled that we, their parents, had a date night planned for Saturday. While they went off to Gravity at the local movie theatre, we went to hear Iris Dement sing at the Bloomington Center for Performing Arts. She's a songwriter in the country and folk traditions, who has sung with John Prine, Ralph Stanley, Steve Earle, and Emmylou Harris, among others, and I first saw her on, of all things, the Conan O'Brien show, probably back in 1994. She invited him over for Thanksgiving.

She sings with a high, plaintive wail, piercing at times, in mountain style. Not everybody likes it. She writes a lot of sad songs. Ditto. But some of them reveal her great capacity for joy and acceptance. I connect. "My Life" is one of my favorite songs of all times. She sang that and "Easy's Gettin' Harder Every Day," which she somehow hilariously described as being as low as you can get, and "Our Town," and a bunch of the new ones. I loved the contrast of her gentle humor and sad content, sewn together with the thread of her fierce honesty.

I think she was blonde when I saw her on Conan, but she was a redhead in the concert and in this picture from a 2007 gig, by Ron Baker (shared via Creative Commons). Also enjoyed her in Songcatcher, a sweet film with Janet McTeer and Aidan Quinn about collecting songs in Appalchia. Yes, I have the soundtrack!

I have two of her albums, Infamous Angel and My Life, and there's a new one out now, Sing the Delta. You can see all of her album covers here, at her website.  I'm going to be playing Iris Dement while I cook for the next couple of weeks, you bet.
Posted by Kathleen at 12:06 PM

A starry roadtrip is a wonderful memory.