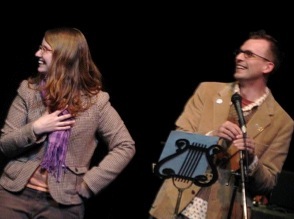 My first job out of college was as a staff writer and editor for an encyclopedia. It was a digest encyclopedia, culling the main facts of, well, everything in the world, from the other, bigger encyclopedias and Facts on File in order to update yearly the existing entries, most originally written by experts, but this was also the year of a major revision, with the addition of new material, so I got to do some of that, too.

Fun fact: I got to engage Alvin Goldfarb, now the president of Western Illinois University but then on the theatre faculty at Illinois State University, to write the theatre history article. (That's for Hannah Stephenson. See her poem, "Name Dropping" in her wonderful poem-a-day-in-response-to-images blog, The Storialist.)

And today's rambling is to link up encyclopedias and theatre for the fabulous Encyclopedia Show, a hilarious event in Chicago, dandelioning up in various other cities now as well. A regular cast of actors, comedians, and musicians, and a fact-checker, plus invited guests, present encyclopedic knowledge on a theme.

This was a special event we got to attend as participants in Great Books Chicago this past weekend; the theme of our show was Creation Myths, and I got to write an "article" and "perform" it (more on that tomorrow).

And tomorrow night's show--Wednesday, May 4--is Flightless Birds. Transport yourself there, somehow, to see it, if you can.

But I would like to rhapsodize a bit right now on the singer/songwriters Diana Lawrence and Naomi Ashley who sang their encyclopedia entries in the Creation Myths show.  Diana sat at the piano and played and sang "Purusha," her haunting song about the cosmic self in Vedic origin myths.  In Diana's song, a contemporary soul is seeking to give herself over completely in order to fly and be free in the universe.  In the Rig Veda myth, Purusha is a giant sacrificed and essentially dismembered by the gods to make the people and animals of the earth.  (This tied in with Wendy Doniger's talk on dismemberment and origin myths of the Rig Veda on Sunday at Great Books Chicago.) 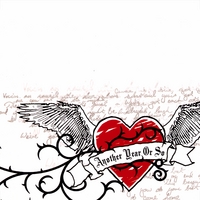 Naomi Ashley played the guitar and sang her original and hilarious song about Al Gore inventing the Internet. Known around town for her comic songs, Naomi is also a serious singer/songwriter, and I have been listening to her CD, Another Year or So, which has a country/folky feel and lyrics both poignant and ironic, the mix working beautifully in the title song, about what a couple is doing to hold together for "another year or so."

Most of the songs are by Ashley herself, but album ends with "All the Best" by John Prine. And I love the note about "Soft on My Shoulder," music & lyrics by Fred Eaglesmith: "Recorded in our crappy apartment on Foster in 2003."  Another song is recorded at the Uptown Poetry Slam! Otherwise, the CD is recorded at Strobe Recording in Chicago, but I love that mix of raw into the  professional studio sound here. Ashley's honest, yearning voice and lyrics come through in everything.

Pictured above: Encyclopedia Show hosts Shanny Jean Maney and Robbie Q Telfer, who, by marvelous coincidence, are people from my town (via their schooling).  Met Robbie and Patrick (the Intern) Carberry (a regular cast member) in Babbitt's Books when they were regular customers, and will meet Shanny now for coffee or wine in beautiful Uptown Normal as soon as we can, now that we know we are weird sisters.
Posted by Kathleen at 8:03 AM

Kathleen, your performance of Izanagi and Izanami was witty and quite enjoyable. I relished the whole show, particularly the stand-in for Jilted Emily Rose.

The Encyclopedia Show sounds like great fun! So creative.

thats a super cool job u had... i could never survive it...my general knowledge is soo bad, i never answer questions about geography!!

You are full of fun facts and thoughts!! Thanks for the shout out, my dear.

Thanks, all! Glad you are enjoying the fun facts! Sheila, you were hilarious yourself, throwing coins in the open guitar case!

Kathleen, I was of two minds about doing my most recent Confessions of Ignorance post, but yours tipped me over the edge...