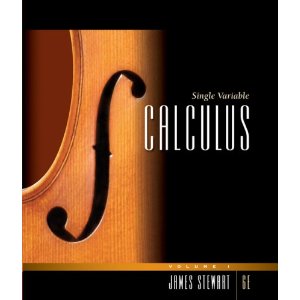 Day 252 of the "What are you reading, and why?" project, and I met a man who wants to be reading Stewart's Calculus, 6th edition, in a nice affordable used copy, because he is going to be teaching math and tutoring chemistry at the local community college, and he wants it handy on the shelf for students, but we didn't have one.

Amazon, of course, has various editions, custom versions for particular universities, and volumes in a series, and Abebooks had a really cheap used copy, but he doesn't like to order online, and we don't provide that service at our little store, now with little cat, still named "Little Stranger," until the proper name of the cat appears.  Yet another person suggested Camus, and another customer suggested October as that's the month she was found and also she is all black, with glints of white on her chest and the tip of her tail is white.  Another possibility is Moraine, as she was found on the moraine, walking down the white line of a country highway, but would she be nicknamed Mo?  Would it be misheard as Lorraine?

Anyhoo, we might have to pull Old Possum's Books of Practical Cats off the Poetry Cart...And, in the land of coincidii, of course today I handled a cartoon book by Beverly Guhl called Cats are Better than Men.  Beverly was pretty convincing.

Oh!  The guy who wanted Paul Auster last week turned up as a waiter at the local organic foods brunch before Living Downstream.  The film is amazing.  I urge you to see it if it comes to your town and to seek it out if it does not.  An educational DVD is available now, and some of us hope to get this into the local schools, to build awareness.  It would go along with the healthy food information my daughter is already getting in her consumer science and physical education classes, and it would counter some of the status-quo information coming out in agriculture courses.  But Steingraber comes from farmland, her cousin is farmer, three of the speakers after the film were organic farmers.  She is not opposed to agriculture!  She is opposed to poisonous pesticides that harm us, our earth, our air, and our water.

I was very moved by the scenes in which Rachel Carson, of Silent Spring, testified before Congress, making this a human rights issue.  We have a right to a clean environment and not to be poisoned in our own homes, in the midst of our lives, she said.  And Sandra Steingraber is carrying on that human rights fight.  "Never give up," she wrote in our books.
Posted by Kathleen at 8:54 PM

I suppose the name Octopussy is out of the question for the cat?

You should feel free to suggest it to the boss, while buying a book and smiling cheerfully.

In honor of her black tux and white-tipped cane you could call her Fred Astaire. But I think Kim's Octopussy is better. Could shorten it to Octo-P. Like a rapper.

Lately we are leaning toward Babette, so we could answer the phone, "Babette's Books," in a very feline-sounding French accent.

Brian did not think it would be good for business to call her Octopussy. Since Kathy's job depends on business being good for Brian, I will now begin to call her Babette, which I will say in my Simone Voice.

And I weel zay it in my Genevieve voice.

Or perhaps I could use my Miss Piggy Voice...MOI?

I will use my Inspector Clouseau voice but eventually I will call her Babs.