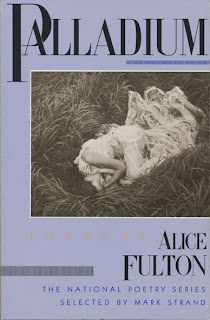 Day 241 of the "What are you reading, and why?" project, and, as of today, some people are reading, for the first time, or re-reading, for the umpteenth time, some work by Mario Vargas Llosa, because this Peruvian writer is the winner of the Nobel Prize!

(You'll see that Wikipedia is already up to date on this, and will probably be altering the article rapidly as new info comes out.)

Yesterday's winners in chemistry, for their work with palladium, put me in mind of Palladium, this book of poems by Alice Fulton, with its gorgeous palladium print by Ellen Foscue Johnson, "Woman in the Grass."

I loved the NPR story yesterday, on the chemistry winners, when the Morning Edition host Steven Inkskeep said, "You lost me at 'palladium,'" and expert Joe Palco went back to define it.

Inskeep was thinking of the theatre definition, but Palco was speaking of the metal, used mostly as a catalyst.

That is the definition that serves in the first section of Fulton's Palladium, followed by poems that, in some way, riff off that.  And then she provides the other definitions, section by section, including the one about theatres and music halls.

Palladium process returns to the chemical definition and a print process in photography that produces beautiful rich blacks, and a precision and mystery, as in the black and white photo on the cover of the poetry book you see here.

Other definitions are mythological.  Athena made a palladium, a kind of talisman in honor of her friend Pallas, whom she accidentally killed.  Athena's palladium is associated with a cult object, the kind that fell from the sky in Troy, meaning safety, later called palta and connected with meteorites.  We always want to turn the scary thing--a sudden hot rock falling from the heavens--into something that insures our safety, don't we?

And, generally, the Nobel Prize secures the safety of a reputation, and honors a body of fine and valuable work.  But I definitely want to know more about this "literary feud"!!  Why did Vargas Llosa punch his friend Gabriel Garcia Marquez in the nose?!  Garcia Marquez is a Nobel Prize winner, too, from 1982, but the nose-punching incident was in 1976....still, professional rivalry, jealousy, or some personal issue?  Eh, Wikipedia...?!
Posted by Kathleen at 4:01 PM

Speaking of Nobel Prizes - I can never understand why we Americans always win the Economics award (and again this year) but our economy is so screwed up. Maybe our prez should consult these geniuses?

Good idea, Nick! I know a poet whose dad won the Economics Award once. Alas, he's dead, so the President can't consult him....