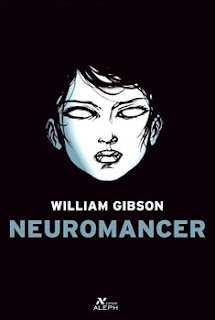 Day 240 of the "What are you reading, and why?" project, and Stephanie's boyfriend is reading Neuromancer by William Gibson, a cyberpunk novel that he was happy to find at Babbitt's.

But I learned this when I asked Stephanie, who is a museum intern and tour guide at the cemetery with me these days, "Is your boyfriend reading J. G. Ballard?"

"Yes!" she said, "Neuromancer!"  Then we had a conversation about Atrocity Exhibition, by J. G. Ballard.

So we are both a bit confused.  (I'm sure Stephanie's boyfriend will set us straight.  Or set me straight, the next time he is in Babbitt's.)

Anyway, Neuromancer won the 3 biggies of science fiction, the Nebula Award, the Phillip K. Dick Award, and the Hugo Award.  I'm sure it's a wonderful novel.

But as I continue in The Common Review, I am reading "Like Pain to a Knife: Reading J. G. Ballard's Fiction," by Paul Youngquist.  I have got to read some Ballard, as we both grew up during the violence of the 60s (race troubles, assassinations, war), having our childhood innocence spattered with civil blood, even as we continued on in a fairly sheltered existence.  As the violence, and its commercialization and regularity continued, the world changed around us, like a shattered windshield nobody ever fixed.

As Paul Youngquist explains it, Ballard went ahead and turned the psyche inside out in his fiction, since all that supposedly repressed stuff was clearly out there already.  And Youngquist himself could identify with that.  He says, "It's not me who needs a shrink.  It's the world."

I love the boldness of that.  Yes, the world is screwed up.  If you have a bit of borderline depression or generalized anxiety disorder, and Youngquist says he does, isn't that the most appropriate reaction to a world in which human life is valued very little, violence is commonplace, and no one really wants to fix things?

Oh...yes, that's always been the dark side of reality.

And the world could get blown up in a moment?  We have nuclear war.
Posted by Kathleen at 6:08 PM

I have been recommending Neuromancer to my son for *ages*...and Snow Crash by Neil Stephenson (also a classic work of cyberpunk fiction).

Perhaps my fascination with the dark (and my own persistent anxiety) is far more normal than I would have guessed.

Yes, I think so, Susan. I was talking to my husband, a few years older than me, about how I was surprised that, many years after Hiroshima and Nagasaki, when I thought surely we knew enough never to use an atomic bomb again....we, being humans,...how my college students had grown up with the feeling that all life could be gone in a moment, so they were still very close to the very real possibility.... It helped me see better. We have NOT outgrown that awful death wish/capacity and its fear.

Yes Ballard did turn the psyche inside out and what popped out plenty of times was thanatos. People walking en masse into the oceans like lemmings. A desire to get off sexually on the destruction and death of people in demolition style auto crashes. I think there was a movie made of this book, "Crash", by David Cronenberg, starring James Spader. Gibson has become more speculative in the last ten years. My son is reading Zero History, the third in a loose trilogy that covers intrigue involving the Federal Reserve, post-war Iraq and fashion marketing of all things.

I will have to read Youngquist on Ballard.

When I think of Ballard, though, I usually make a mental association with John Boorman's film "Hope and Glory" from Ballard's "Empire of the Sun" Those actually both seem(ed) current to me, because when I was growing up in England and Italy, the marks of WWII were so present, it wasn't history (the way Vietnam is now history): It was much closer to being contemporaneous than Vietnam is to kids growing up now. Then, coming home to the states and watching the smoke rising over Washington in 1968 made the interweaving of innocence and chaos here and there seem seamless.

And, yet, for all the darkness that continues to plague us (or our spirits), the sun still rises, the flowers bloom, and we can hope to be kind.

It was the scene in High Rise where the protagonist is sitting on a penthouse balcony eating an Afghan Hound that convinced me.

Yowsa. Lovely to hear from you, Paul. It's a great article, and I love The Common Review. You have convinced me to read Ballard, which I will do with trepidation.