I Promised You Cyborgs 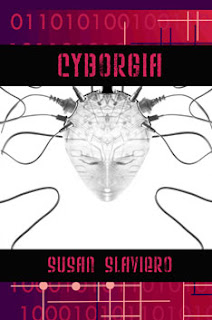 Day 315 of the "What are you reading, and why?" project, and a while back I promised you cyborgs, and today, here they are!  A reminder of the why:  I met poet Susan Slaviero when we were both scheduled as readers at Brothers K in Evanston, Illinois in the RHINO Reads series, and shortly thereafter her book Cyborgia came out from Mayapple Press.  I read it and found it fascinating, and asked her a bunch of questions about it.  Here are some of her answers.

Me:  The book Cyborgia seems like a marvelous mix of feminism +  science fiction +  mythology +  language poetry.  Is it?  If so, why?  What prompted you to do this?

Susan Slaviero: Yes.  I would say that’s a pretty accurate description.  I think we all have our obsessions, and my obsessions tend to appear as recurring threads in the things I write.  I’ve always had a fascination with gender-as-performance, and feminist theory in general.  As a final project for the Women’s Studies program in college, I completed a research project on cyberfeminist theory. I looked not only at the dominant theorists (such as Donna Haraway and Sherry Turkle) but also at poetry, fiction, hypertext and the ways in which technology influences our ideas about gender, work and sexuality in popular culture. Cyborgia is, in many ways, my attempt at explicating these ideas through verse. 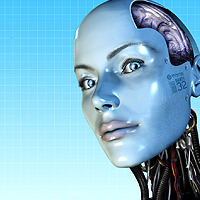 Do you read a lot of science?  Non-fiction, I mean, and maybe medicine?

I enjoy reading pretty much everything.  I do like non-fiction, especially books about psychology—which is more of a ‘soft science’ I suppose.  I read a good deal more fiction and poetry than non-fiction these days.

Do you read/watch a lot of science fiction?  Favorite authors/films?

I would say I have always loved science fiction!  Some of my favorite authors include Margaret Atwood, Ray Bradbury, Mary Doria Russell*, Marge Piercy, Philip K Dick, Neil Stephenson, and William Gibson, to name a few.  I’m actually a big fan of science fiction television shows, too. I love the recent Battlestar Galactica series that appeared on the scifi channel—I think it’s one of the best things I’ve ever seen on television!—I also admire a number of other science fiction series like Firefly, LOST, and the X-files.


*[I'm pretty sure I introduced Susan to Mary Doria Russell in this blog!]  Re: above non-fiction reading/knowledge in science, algebra, computer science, George Boole.  I love the Boolean Fairy Tales section of the book.  I’ve done Boolean searches, and understand Boolean logic to be combinations of variables using: and, or, not, if, then, except.  Is this how you composed or conceived of some of the poems in Cyborgia?

I do love the idea of variables, of combinations and permutations…I think this is most evident in the third section of the book—Boolean Fairy Tales.  Still, I think it appears throughout the work, particularly as the gendered cyborg bodies are imagined, assembled, and disassembled.

I looked up the Red Queen Hypothesis, title of the first section of Cyborgia, assuming it related to the book’s Lewis Carroll epigraph, “Now here, you see, it takes all the running you can do to keep in the same place,” and it does!  That is the “red queen hypothesis” in evolution—that sexual reproduction, though prevalent, is sort of inefficient, leaving us “running…in place,” so to speak, partly because it works better in adapting the individual than the species for life on earth.  Is that a fair summary of the theory?  And is that indeed a context for the poems in this section and the book as a whole? 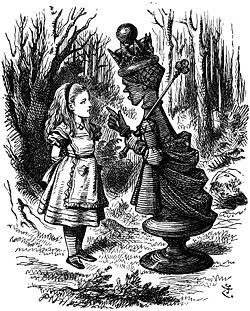 The first section of the book is especially tied to this theory.  I’m thrilled that you looked it up!  I think the evolution of reproduction—which has changed dramatically as technology becomes more advanced—is an important aspect of the book’s opening segment.  In many of these poems, reproduction is asexual, mechanical, violent.  There’s a certain inefficiency to these processes as well. Admittedly, I’m playing with the theory a bit!  I think as we make (human) reproduction a more technological process, we are not so much moving forward as “running in place.” 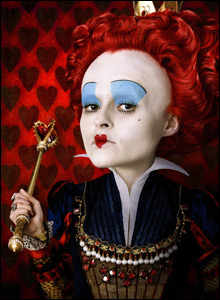 Specifically, the Red Queen Hypothesis has the “evolutionary arms race” in it—the species fighting each other for life—and I notice how many of the cyborgs have actual “arms” or weapons built into their mechanical arms** or bodies***.

**Example: In “Gretel Discusses Her Prosthetic Arm,” Gretel’s new “mechanical limb” has fabulously efficient kitchen tools built in and actual weapons: “my ulna is a loaded gun, …the bend in my elbow bears teeth.”

***Example: In “A Cybernetic Mermaid Dreams of the Sea,” the speaker asks, “Would you have me hardwired with finger-guns, / tridents for arms, a death ray behind my uvula?”

Tell me more about this, in terms of individuals (and their relationships) and in terms of “survival of the species” in Cyborgia.

These cyborg women were designed as weapons, and intended to fall under the control of someone else (i.e. the designer or ‘creator’).  In both “Gretel” and “A Cybernetic Mermaid” this backfires upon their creators, as they are sentient beings, capable of autonomy and therefore unpredictable.  It’s a chilling thought, to imagine something we’ve made to suit our own purposes might evolve and become something “other than what (we) intended.”


I love how “Cybernetic Mermaid” progresses in self-consciousness and perhaps changes and the course of events under man’s seeming control:

...I have become something different
than what you intended.  More than webbing and talons, or a nuclear
fishtail. I am fragments of your carefully drawn schematics:
aquatic chimera           water-larynx                endsong.

Are you saying that she can sing her own end to the world, or change the ending, turn it away from the inevitable, possibly nuclear, “endsong”?

I think that’s a fairly astute interpretation.  She is, after all, an autonomous ‘weapon’ and that’s a very dangerous thing.
[More from Susan Slaviero tomorrow!]
Posted by Kathleen at 6:48 PM

I appreciate your imagination, your freedom to explore and walk into the realm of the esoteric. when I was very young I used to pick up books in science, ie, nuclear physics, astronomy, philosophy, psycho-kenises, etc., Isaac Assimov, Carl sagan, Jung, Ba Ba Rambas, etc., anyone who could take my mind in a journey beyond the mundane. I believe your mention and interest in the 'cyborgia' is similar. Thanks for the recognition of 'the beyond'. Albert Einstein was once quoted in saying "...imagination is the greatest expression of the mind".

Kathleen, you *did* introduce me to Mary Doria Russell!

Yay! If not here, then at Goodreads.... I just sold a copy of The Sparrow at Babbitt's!