I Am Not an Ostrich 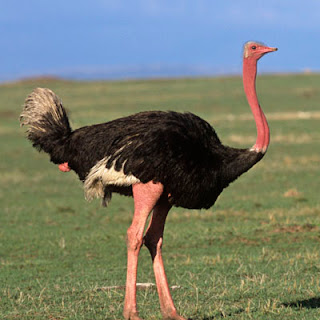 Today is John Updike's birthday, and you'll want to read the story about his childhood (and lifelong but subdued) stammer in today's Writer's Almanac. He was not an ostrich.

I understand the urge to write because of a speech deficiency, having had "inaudible" written on my report card in 4th grade. I did find my voice, but sometimes I wonder if all the years of my acting career should have been spent writing.

And the "should have" shuts me right up.

Today is Random Coinciday in the blog. Yesterday, on Thor's Day, I wrote about the silver hammer of fate, so you can bet I got a little shiver when the word "hammer" was part of the dialogue of the movie I saw last night, as was "fate" and "freewill."

As I watched, I kept feeling it was charmingly old-fashioned for such a new-fangled film. I went knowing nothing about it except that Emily Blunt was in it and I'd seen part of a trailer for it with guys in business suits trying to get a politician to "follow the plan."

Then the credits: it's based on a story by Philip K. Dick!

Dick is the guy that guys keep telling me to read! I have a box of Dick books from Doug! Including Blade Runner,with a movie tie-in cover and that title, with the real title, Do Androids Dream of Electric Sheep, underneath, since The Bladerunner as a piece of writing is something else altogether: a novel by Alan E. Nourse + a screenplay adapted from it by William S. Burroughs. (How's that for random?) 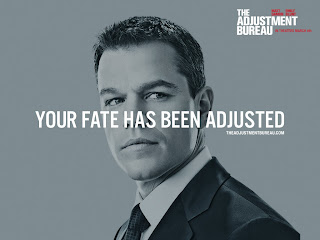 The Adjustment Bureau official website.
Posted by Kathleen at 7:15 AM

It's easier for me to speak if I'm reading out loud from a script (or, really, reading anything out loud). Speech therapy tends to do that to your learning style, but not always.

But yeah, I'd rather write, any day, even though I speak quite clearly now.

Emily, have you seen The King's Speech?!

I saw The Adjustment Bureau last weekend and enjoyed it. Have a great weekend.

Haven't seen The Adjustment Bureau yet but was intrigued by the trailer. Now that you've said it is based on a Philip K. Dick story...well I want to see it even more but I want to read the story first!