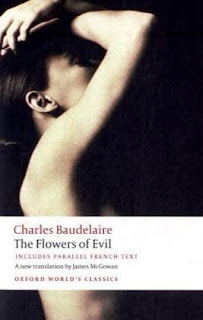 Yesterday I had the pleasure of attending a retrospective poetry reading by James McGowan, who graced us with a few poems from each decade of his long career.  He is the translator of Charles Baudelaire's Les Fleurs de Mal (The Flowers of Evil), from Oxford University Press, and re-released as one of the Oxford World's Classics. (I've linked you to Amazon, but locals can probably find a fine copy at Babbitt's!) He read from this sexy edition, but you'll see another cover below.

Jim organized the reading by decade, starting with a few poems from the 1960s, and incorporating some translations along with his own work (including a collaborative translation from a German poet! Why didn't I write stuff down? Enthralled, I guess.)  He had a perfect balance of humor and seriousness. For example, he revealed that the only poem he's written since 2010 is a limerick...and he'd spare us that. (Of course, now I want to hear it.)

And he left us, somehow, gazing at a universe of stars and listening to the breathing of whales.

I'm delighted to report that Jim used the two-poem warning--in fact, a three-poem warning--something I recently read about at Voice Alpha, a site devoted to advice and support on reading poetry aloud.  He began, "I have two more poems from...and then one more poem," and made the audience laugh with "only three more poems to go," but we were perfectly content! 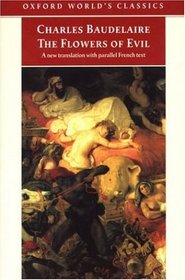 There were other poets in the audience. So lovely to see John Knoepfle, whom I had also heard read on the Illinois Wesleyan campus, though in the new Ames Library, and Lucia Getsi, who had returned from retirement in the South for this event in central Illinois. Poet Jim Plath introduced his colleague. Kathryn Kerr, of Turtles All the Way Down was there, and Kirstin Hotelling Zona, the new editor of Spoon River Poetry Review.  A plethora of poets, an abundance of love.  And a fine turnout from the community, as well.  A roomful of joy and appreciation, for the flowers of evil.
Posted by Kathleen at 7:50 AM

Any reading that leaves listeners "gazing at a universe of stars" must have been a don't-miss. Sounds wonderful. Have a great weekend.