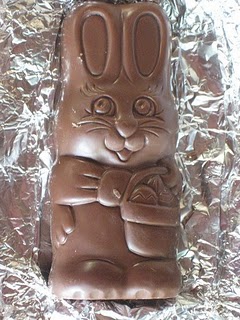 Today I woke from a dream of praise to a band of gold across the eastern sky. Now I've got Freda Payne singing "Band of Gold" in my head, and the eastern and northern skies have gone gray-blue, holding more rain. The winds last night spattered white blossoms onto lawn and patio. Hosta is uncurling, and lily-of-the-valley stands around like ranks of pixie-stick soldiers at ease.  It's Fat Tuesday in the blog, day of abundance.

Easter brought Reester Bunnies into the house, and I took the last of the ornaments off the Mardi Gras tree, dropping shiny beads and plastic eggs into a plastic pumpkin till next year. Someone else must disassemble the dusty tree.

To wake in praise is really something. I'd done that thing of asking my overnight self to guide me, and the morning dream was me typing a review that praised a woman and a man, young and old, someone kind and someone mean (in the past).

At the moment I praise Blondie and Brownie (home of the unwrapped Reester Bunny) and marvel that they've actually eaten something called the Chicken and Waffle cupcake, pictured at their blog, here. Yet another taste sensation as unusual as Bacon and Chocolate, but all these foodies claim it works!

And while I'm at it, I should mention Foodgasm: the Blog.  Green bean casserole will never be the same.

Ah, and now I can praise the sun for coming out!

How long will it stay?!

April showers, May flowers (but no actual clichés allowed in poem; maybe it can be a ghazal)
Posted by Kathleen at 7:06 AM

Not long, I can answer about the sun, a fine gray rolling in on the hefty wind.

Fat Tuesday? What an excuse to splurge on chocolate! Yummy!

Lily-of-the-valley as pixie stick soldiers at ease--How funny. I spent part of the afternoon trying to remember the name of pixie sticks and some other candy that explodes on your tongue. The house where I grew up had a big slope of lily-of-the-valley. We called them popcorn flowers.

Yes, yes, when they open, sweet popcorn! Mine in the north bed are still thin stalks. My neighbor's in a sunny corner are much farther along.