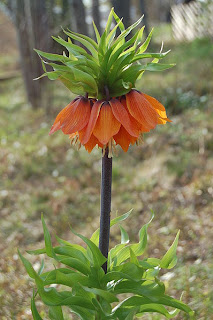 OK, I knew but had forgotten that Emily Dickinson's favorite Shakespeare play was Antony and Cleopatra. I've run into this again in my Cleopatra project research. Emily called her sister-in-law "Cleopatra" and connected her to the Crown Imperial (Fritillaria imperialis), a tall, queenly, spring flower.

In The Gardens of Emily Dickinson, Judith Farr reports on Dickinson's frightening eye trouble, during which reading was forbidden: "It was reading Shakespeare that she most missed; as soon as her doctor's ban was lifted, she opened Antony and Cleopatra." 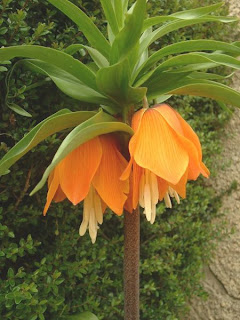 Imaginary background music: "Walk Like an Egyptian," The Bangles.

More random coincidii: Because it is October, I needed to watch To Kill a Mockingbird again. There's an early scene in which Jem walks like an Egyptian because of what he's studying at school!

Fritillaria images thanks to Wikimedia Commons. First in public domain; second (Antony and Cleopatra drooping together!) via Creative Commons. 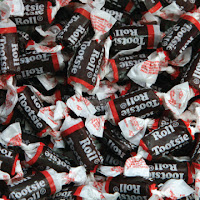 And because Tootsie was right next to To Kill a Mockingbird on the shelf, I've seen that again, too, learning something new this time that, oddly, ties in with yesterday's wild animals dream, and tootsie rolls, a fine Halloween treat, and perfect for a Fat Tuesday in the blog.
Posted by Kathleen at 8:23 AM

Okay, now I have the video of Emily in dark glasses opening A & C, to the tune of "they're hangin out at the donut shop..." stuck in my head. I'm going to get even, Kathleen!

Ah, Dale, I hope you are doing this while chomping on a Tootsie Roll. Or sipping one...*

*A tootsie roll (for real or just in my wacky head) is amaretto and orange juice, on the rocks.

Amaretto and orange juice--yum. I knew it as a "bocci ball."

This is interesting and bizarre...I love how what we are obsessed with often overlaps like this!

It reinforces how everything is connected!