Why I Love Shaw

I love George Bernard Shaw. Why? Let me count the ways:

So yesterday I re-read Caesar and Cleopatra, prologue by the Sun God Ra (hawk's head) and Shaw's notes at the end and all. Ra reviews some history for us and scolds the British theatre-going public of Shaw's time in delightfully funny and annoying ways.  For example:

And the gods smiled on Caesar; for he lived the life they had given him boldly, and was not forever rebuking us for our indecent ways of creation, and hiding our handiwork as a shameful thing. Ye know well what I mean; for this is one of your own sins.

OK, I might find Shaw's use of the semi-colon annoying, as well as his lack of use of the apostrophe. Plus, I don't know well what Ra means, but I have some guesses. 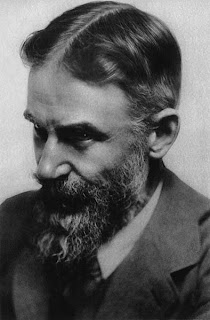 (That's Ra with a sun disk on his falcon head above, via Jeff Dahl and Wikimedia.) (And here's Shaw, looking sort of hawk-headed himself. I think it's the eyes. Or maybe the way he parts his hair.)

All of this reading and re-reading is reminding me of my undergraduate major, Poetry and Political Philosophy, at Kenyon College, actually a "synoptic major" in English, Drama, and Political Science. My thesis was on the character of Caesar in Shakespeare in Shaw. This time around I will be focusing on Cleopatra. And spending some time with Mark Antony.

But at the moment I am looking at how Shaw looks at Julius Caesar, as a great and original man:

Originality gives a man an air of frankness, generosity, and magnanimity by enabling him to estimate the value of truth, money, or success in any particular instance quite independently of convention and moral generalization....He knows that the real moment of success is not the moment apparent to the crowd. Hence, in order to produce an impression of complete disinterestedness and magnanimity, he has only to act with entire selfishness; and this is perhaps the only sense in which a man can be said to be naturally great.

Shaw pursues this kind of Superman in various characters in his plays, poo-poohing the conventions of his own times:

[The] distinction between virtue and goodness is not understood in England: hence the poverty of our drama in heroes. Our stage attempts at them are mere goody-goodies. Goodness, in its popular British sense of self-denial, implies that man is vicious by nature, and that supreme goodness is supreme martyrdom. Not sharing that pious opinion, I have not given countenance to it in any of my plays.

I do so love his annoying self confidence! And his frank expression of doubt:

The really interesting question is whether I am right in assuming that the way to produce an impression of greatness is by exhibiting a man, not as mortifying his nature by doing his duty, in the manner which our system of putting little men into great positions (not having enough great men in our influential families to go round) forces us to inculcate, but as simply doing what he naturally wants to do.

So much going on here! Shaw is:

1. Talking about playwrighting--producing an impression of greatness--but of course today's politicians work on their image!
2.  Damning the nepotism of British society...and that practice anywhere, ongoing.
3.  Examining human nature, and assuming that man is not naturally vicious.
4.  Differentiating natural selfishness from greed for money or power.
5.  Criticizing Christianity: It must be a constant puzzle to many of us that the Christian era, so excellent in its intentions, should have been practically such a very discreditable episode in the history of the race. 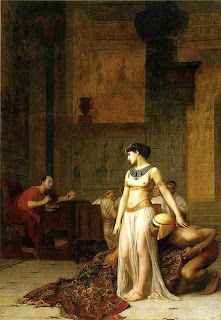 Meanwhile, here is the painting Cleopatra and Caesar by Jean-Leon Gerome. She appears to be emerging from a carpet, as Plutarch and Shaw tell it. Schiff says she was smuggled in by way of a hemp or leather bag.

And, as I recall from The Apple Cart, Shaw's favored political system is the benevolent monarchy! If the monarch is indeed benevolent (not vicious) and natural.
Posted by Kathleen at 8:48 AM

Poetry and political philosophy? Sign me up, please! (I was English/Philosophy for a while there...)

Hannah, if all goes well, this project will actually end up in Columbus, so I'll invite you!

Thank goodness you don't love Shaw for his looks. That would be superficial and also scary. (code word beastne)

I have a love/hate thing going with Shaw. Kind of how he felt about Shakespeare. He is certainly interesting to talk about, at any rate!

I've never seen Caesar and Cleopatra on stage, although I have seen the movie with Vivien Leigh. At the time, I got it confused with "Champagne for Caesar" and then "A Double Life," where Ronald Colman goes off the deep end while playing Othello and starts to get all jealous and murdery because he over-identifies with the role. I have no idea why that one got mixed in in my brain. Yes, they're both Ronald Colman, but he's playing Othello, not Caesar. And he's not playing Caesar in "Champagne for Caesar," either. It's about a game show, I think. Sometimes my brain works in mysterious ways.

I certainly enjoy your mysterious brain.

I would I had thy inches; thou shouldst know
There were a heart in Egypt.

Such a wonderful, ramshackle ruin of a play, the characters burning and falling from the very start. Happy reading, dear!

Thanks, Dale. Sounds like you know it well. Great images to start me off!

i think it's awesome that you put so much effort into this post in order to share it with us! :)

Thank you, Patience! And I think it's awesome that you believe in letters, paper, and snail mail. So do I!