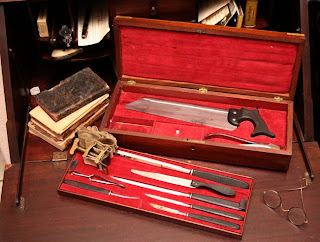 Last night we got this email from our fearless director for the Voices from the Past Evergreen Cemetery Walk 2011: "Tomorrow is 'hump day.' If you make it through in one piece, the rest of the Walk is a piece 'o cake!"

Well, we made it through. We, the actors, volunteers, and tour guides, did not collapse, but, as of the "hump of the week," 10 people have fainted--a combination of dehydration, pre-existing conditions, lack of breakfast, and blood. They tend to go down at or near the two Civil War doctors, covered in (stage) blood, discussing amputation, which, as you might recall about the Civil War, was a main treatment for bullet/mini-ball wounds.

Yes, one of the doctors carries a saw.

I perform near the monument of a man named Townsend who died in 1865, at the end of the war, at age "54 yrs., 6 mo." as is inscribed right on the white stone. It reminds me that if I had lived in the first half of the 19th century, I'd be dead by now. Um, I mean that in more ways than one.

I'm also near the grave of a Civil War soldier, marked with a star, from the 33rd regiment. And, of course, my own--Martha Rice--marked for the cemetery walk with red, white, and blue flowers. Early this morning, the cemetery workers were out with their leaf blowers, clearing off the graves and performance spaces--what great guys they are!--and they'll do it again tomorrow morning, as all morning and afternoon, the yellow and orange and red leaves were gently falling. 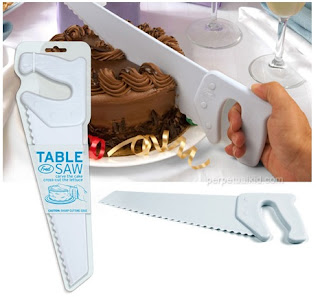 For your own Table Saw cake knife, go here. For your own ampu-tation kit...er, for more on Civil War medicine, go here.
Posted by Kathleen at 3:57 PM

This must be a lot of fun for the participants and the strollers-by. Glad you're still in one piece.