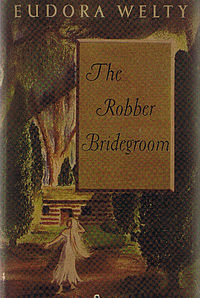 Yesterday was all about Salome. One of my favorite Salomes is the lusty stepmother-witch in the musical The Robber Bridegroom, based on Eudora Welty's novella set in the Natchez Trace territory. This Salome conspires to kill her stepdaughter so she can have a handsome young suitor for herself.  Her name is pronounced to slant rhyme with baloney.

Welty's tale calls on various fairy tale versions but also the Cupid/Psyche myth and the real adventures of an awful bandit of the Trace, Little Harp.

And a character in the musical is Big Harp, Little Harp's bandit brother, who is a disarticulated head carried around in a suitcase!

Salome sings a song comparing Rosa-mund, the step-daughter, to a lilybud and herself to the "prickle pear bloom."  Thanks to Stan Shebs for this prickly pear (opuntia, a cactus) in bloom.

And, speaking of Rosamund, my trellis roses are beginning to pop!

I bet your roses will be beautiful.

Kathleen, where can I how can I read more of your poetry? Coming to your blog from Pirene's fountain.

Leah, hello and thank you! Here at the blog you can click the titles under the heading "Links to My Work" to find a variety of poems published online!

I will come check out your blogs, too!

I love how anything can become a musical now. I remember the Salome from the Bible, but I can't remember which story, maybe she was Delilah's mother, or the woman who asked for the head of John the Baptist?

Oh! I just found your last post about Salome! :-)