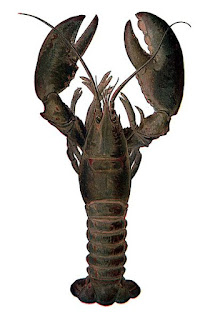 When I saved this public domain image from Wikipedia, I titled it "Lobster champ" because it looks a bit like a boxer who just won, holding up his boxing gloves in the center of the ring. Yes?

But this guy might have a little trouble with what they call "fancy footwork," eh?

Anyhoo, I was delighted to come home from my recent retreat to find the new issue of Arsenic Lobster up, with a bunch of wonderful poems in it, and one of mine, too! I love editor Susan Yount's introductory comments and her insight that "every poem in Arsenic Lobster has something hard to say." Wow! Yes.

I also came home to an acceptance (of 4 poems!) by a journal I really admire and a lovely review of Nocturnes (Hyacinth Girl Press) by Dave Bonta of Via Negativa.

Yes, I felt externally validated, something most people, but especially poets, sometimes really, really need to feel. And that was a nice other-side-of-the-metaphorical-coin of this intangibly valuable retreat weekend, where I got to feel internally replenished.

And it was a women's retreat, so equal time now for Rosy Lobster-ette. Really! That's what she's called!

If you like the Cassandra poem at Arsenic Lobster, you might also like the 4 Cassandra poems up at blossombones, another wonderful online magazine.
Posted by Kathleen at 1:54 PM

Thanks for the introduction to this Lobster. This is my fave Cassandra poem yet. Love the vibrant midwest imagery.

Thanks, Robert! It's a wonderful magazine. I had read it online but picked up several print issues of it at AWP Conference this year.

I need to be a better mythologist, but I love your poem in any case. Yes vibrant and lush imagery.

Now I'm off to read about Cassandra and Ajax . . .

Your poems are so vivid and precise. Everything is just right.

Many wahoos on the good news. Loved the end of the poem!

I'll need to brush up on Ajax as well, especially with that imagery of him relieving himself! ^.^

And I'm glad that you received the validation you deserve, Kathleen. It certainly feels nice when other people recognize the quality of your work. :)

Thanks, all! For externally validating me! Sigh...

And the other wonderful poets!

Cassandra and Apollo = the main romance.

But Ajax is in there, too.

Kathleen - Proud to appear alongside you in yet another journal - perhaps we should just start our own traveling poetry show!

Your poems are always a treat - and so is your writing here.

Thanks, Donna. Likewise! Your poem made the roof of my mouth hurt!

I loved the Cassandra cycle, Kathleen. I was a bit surprised by your identification, as you come across as such a sunny sort, but I suppose Cassandra could be cheerful too, in between prophetic moments...

Thanks, Seana. I'm hoping Cassandra had her cheerful days....

Loved the poem--that's such a great journal--and congrats on the acceptances. Keep us posted when they appear!

up to date on your blog now. grandson asleep on lap.life is good.