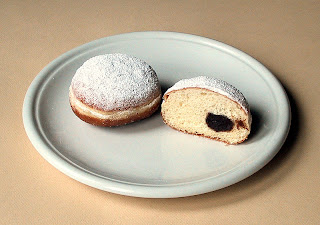 I have a poem in the new issue of THIS that originated in an assignment to translate a poem from German without knowing German. It was a famous Paul Celan poem, and we were given a vocabulary list with some translated words, and I could recognize nouns as capitalized, etc., but I was basically in the dark.

So I wrote several "translations," put two together, and kept revising till I got this, "After Celan." I love the desolate image the editors have paired with it, the two main buildings like the two sections of the poem, the blue car having something lurking about it, like a predatory animal.

My fumbling with the language reminded me of the story of JFK supposedly accidentally calling himself a jelly donut in a famous speech in Berlin, but it sounds like that incident is mainly misunderstood, too. You can read all about it here, at Wikipedia, of course, which also offers the fine image of a Berliner Pfannkuchen, the pastry you see above.

Speaking of misunderstandings, THIS has a call for submissions for work on the theme of "Misreading." 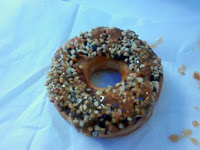 And, if you are looking to get more involved with an online magazine, they need a Columns Editor and a Fiction Editor, both unpaid positions, as are most literary editor positions.

Overheard in my house last night: "I don't see any donuts." (In a slightly accusatory tone.) There had been a vague promise of a late-night donut run based on early rising for a volleyball-tournament trip to north of Chicago today...  Instead, the volleyball coach husband/father of the household ate the last bagel. J'accuse.
Posted by Kathleen at 8:11 AM

Was that your poem I saw in Dead Mule yesterday?

Donuts: Mayor Bloomberg says there's nothing wrong with having just one but no 16-ounce sugary drinks to go with it.

Thanks, Maureen! And thanks to Mayor Bloomberg for taking care of our health while allowing the occasional treat.

Yes, holy moly, that was me. I didn't know it was out there in the world yet. I will go look at the whole dead mule...(too many hushpuppies?!)

Your "translation" project reminds me of two things:

One is Rilke's poem "The Panther." When it was posted at our Year with Rilke blog, it conjured much discussion, from German blog friend Friko and my German friend Inge. Neither of them cared for the Burrows and Macy translation. It is so difficult to translate poems. There is a wonderful essay on this by C. John Holcombe, which we posted on our sidebar there. The article is here.

Two is that sometimes we have poetry readings at my university in foreign languages. I haven't been yet, but I look forward to it, to listen and not understand the meaning, but to enjoy the song.

Oh dear, word verifications are getting even harder to read. I wonder if you have considered not using them, and just using comment moderation? Here goes my 3rd attempt . . .

Thanks for all this info on translation, Ruth!

I have attended a couple readings with the poems given in a kind of staggered but simultaneous way in Chinese and English that was marvelous to listen to!

So sorry about the word verification problem. I realize the trouble people may have been having here is what I'm having commenting on other blogs: seeing a picture with numbers in it instead of the usual word. I hope Blogger figures this out and changes it!!

That's really cool, Kathleen. And you're going like blazes. Which Celan poem was this based on if I may ask?
Congrats.

Thanks, Sarah. It was untitled and not published during his lifetime. Our teacher was among his translators, so she'd gotten hold of it that way. I will send the text to you, and you can tell me what it really means! And if it is now out there in the world with a title, etc.!

That sounds like too much fun--now I want to try! I liked your mistranslations, especially the second one. Yes, I'm sure that's exactly what he was saying!

Looking forward to some mistranslations from you, Cathy, or should I say Miss Translation?!