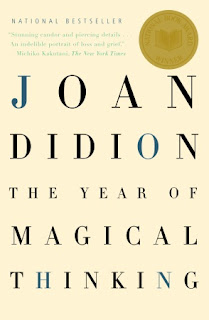 I've just read The Year of Magical Thinking, by Joan Didion. It's about grieving and coping and going a little crazy (just part of the grieving) the year after her husband died. Fascinating and beautifully written book. In it is a passage about geology that relates to "the grand indifference of the stars" in Fernando Pessoa's Book of Disquiet, which I am still reading, mentioned in a past blog entry.

This gets at my sense of things, how science and whatever the soul is co-exist. What is, is, as the Buddhists say. And as I say, frequently, in conversation. 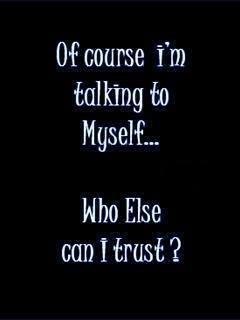 Sometimes with myself. What a comfort to read, in this Paris Review interview, that Joan Didion is, essentially, talking to herself, too! "Are you conscious of the reader as you write?" asks the interviewer, Linda Kuehl. "Do you write listening to the reader listening to you?"

"Obviously I listen to the reader," Didion answers, in her usual smart, blunt way, "but the only reader I hear is me. I am always writing to myself."

Thanks to Joan Didion for her acute insights and to Facebook for "talking to Myself...."
Posted by Kathleen at 1:48 PM

I also read this and found it wonderful. Love all Didion.

One of my friends gave a negative revieww to this book when it first came out, which led me to avoid it for a long time. All the better for me when I did come round to it and found her whole long meditation very wonderful indeed. I haven't been able to bring myself to read the subsequent book on the death of her daughter,Blue Nights, though. Someday...

Love the Didion quotes, and adding the book to My List.

Thanks for commenting, dears! I think I will need to read Blue Nights soon, having met Quintana in Didion's writing.

I loved The Year of Magical Thinking. One of my favorite memoirs. I am skipping Blue Nights, though.

Thanks, Sarah. Good to know. I probably can't bear any more blue writing for a while, either.