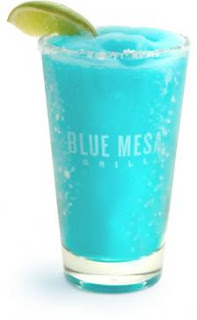 It's Fat Tuesday in the blog, "terrible twos" day in the poem-a-day prompting, and 2nd Tuesday at the Blue Mesa Grill, so here's a happy-hour margarita. It's also Part 2 of my rhapsody on Willa Cather, as I re-read "Tom Outland's Story" in preparation for Great Books Chicago, later this month.

"Once again I had that glorious feeling that I've never had anywhere else, the feeling of being on the mesa, in a world above the world."

I feel like that when I write sometimes.  (Other times, as on yesterday's writing projects, I feel like I'm typing and typing and getting nowhere.) A writer friend, Candace, was talking about how happy she feels when she writes, that time slips away.

Or, as Willa Cather says, "Happiness is something one can't explain. You must take my word for it." (I think I quoted this a while back, too.) "Troubles enough came afterward, but there was that summer, high and blue, a life in itself."

But there's also something terrible that happens in this story of "two poor cow-punchers" entrusted with a herd in New Mexico. They find something wonderful on the mesa, know it to be valuable, and lose it anyway: "something that had been preserved through the ages by a miracle, and handed on to you and me, two poor cow-punchers, rough and ignorant, but I thought we were men enough to keep a trust."

As I type it out, I know it applies not just to the treasures they find but to the treasure of their time together, and the story is indeed about misunderstandings of tangible and intangible value, one of my own obsessions.

These two men both seem to know when there's hell to pay, and that some things can't be undone.  All I can say about that is, no matter how terrible it gets, don't punch any cows.

And here's this from Cather: "Every morning, when the sun's rays first hit the mesa top, while the rest of the world was in shadow, I wakened with the feeling that I had found everything, instead of having lost everything." A good way to wake up.

April 12 poem-a-day prompt: terrible twos
Posted by Kathleen at 6:55 AM

most certainly a good way to wake up.

Indeed, Nancy. And though I live on the plains, I wake that way often, smiling!

Oh! That last quote, especially, is beautiful...inspiration settling over us like waking up in the morning (natural).

Thought you might find this Walt Whitman discovery interesting.

Thanks to both Nancys, Hannah, and Walt! Also, one of the writing projects that drove me crazy yesterday came together today in a high, blue happiness!!