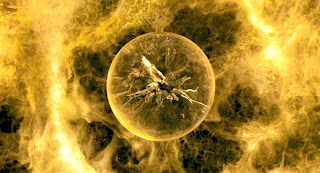 Just when I think I might have to set Cordwainer Smith aside, he amazes me again with the complexity of his thinking. I refer now to his story "Golden the Ship Was--Oh! Oh! Oh!" which sets a real mystery into motion with a scarecrow ship described as a "golden bubble." [This golden bubble spaceship image is from the film The Fountain.]

All the rest was a golden bubble of the feinting ship, nothing more than thin and incredibly rigid foam with tiny wires cast across it so as to give the illusion of a hard metal and strong defenses.

Sounds like various made up financial products that have led to various real economic crises. Sigh.

What almost made me set the book aside forever was the story "The Crime and the Glory of Commander Suzdal" in which the commander listens to the "siren song" distress signal of a planet where Femininity became carcinogenetic. And it just got worse from there.

But the story begins with the warning, Do not read this story; turn the page quickly, etc--and once more I am reminded of Flannery O'Connor who advises no suspense, in essence to know what you are getting into so you can watch how the people behave--and the story did upset me, as promised, the warning serving as its own suspense tactic and inducing close observation of how the characters behaved.

So I read the "Oh! Oh! Oh!" story, a very short one, all the more closely, coming upon marvelous irony and paradox, and an admiration for a writer/foreign affairs expert who could say this about some full-of-themselves-bribed-and-foppish-world-leaders: "With the launching of the attack, Earth itself changed. Corrupt rascals became what they were in title: the leaders and the defenders of mankind." Ha! Transformation was possible, after years of self-satisfied corruption!

Furthermore, even the most foppish among them discovered he was longer addicted to an electrical current stuck into his brain, delivering pleasurable illusions: "The contemplation of the golden ship and of what he had accomplished--alone, deceptive, without the praise of all the worlds for his solitary daring--gave even greater pleasure than that of the electric current." Now "deceptive" still gives me pause, and the knowledge that he was flying a scarecrow ship, but finding an inner peace from an unannounced accomplishment, that interests me. 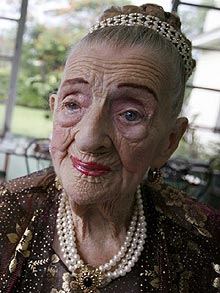 So does Dolores Oh, the character in "The Burning of the Brain" who seems so maligned for giving up her beauty and allowing herself to grow old:

Wife to the Go-Captain was Dolores Oh. The name was Japonical, from some notion of the ancient days. Dolores Oh had been once beautiful, so beautiful that she took men's breath away, made wise men into fools, made young men into nightmares of lust and yearning. Wherever she went men had quarreled and fought over her.

[I pause to point out that while the narrator appears to blame Dolores Oh for her beauty here, and for what men do because of it, I have a feeling that the men are to be held responsible for their own actions..., yes? Also spoiler alert.]

But Dolores Oh was proud beyond all common limits of pride. She refused to go through the ordinary rejuvenescence. A terrible yearning a hundred or so years back must have come over her. Perhaps she said to herself, before that hope and terror which a mirror in a quiet room becomes to anyone:

"Surely I am me. There must be a me more than the beauty of my face, there must be a something other than the delicacy of skin and the accidental lines of my jaw and my cheekbone.

"What have men loved if it wasn't me? Can I ever find out who I am or what I am if I don't let beauty perish and live on in whatever flesh age gives me?"

Yes, here the narrator accuses her of pride and vanity, and yet isn't she asking a just and pertinent question? Isn't she pointing out the male gaze, etc.? Isn't she exposing a flaw in her own culture, dependent on a santaclara drug (stroon) that fends off aging, as well as one in our own that leads to a valuing of surface beauty and all kinds of plastic surgery for the preservation of that? Isn't she asking a real question about real identity, and also exposing a true human vulnerability?

Later in the story, she's seen as grasping and insecure and dragging down her loyal Go-Captain husband, but (and here's the spoiler) then another amazing Cordwainer Smith transformation/complexity thing happens:

Magno Taliano [his brain burned out by heroic action] had risen from the chair and was being led from the room by his wife and consort, Dolores Oh. He had the amiable smile of an idiot, and his face for the first time in more than a hundred years trembled with shy and silly love.

I can't help it: I think the "shy and silly love" is a good thing. In addition, he'll be succeeded now by a young and brilliant female Go-Captain, so the anti-feminism implied elsewhere is undone. Paradoxically.

OK, if you have stayed with me this long, please go and see this, a short piece at Her Circle about the 15th anniversary edition of Backlash: The Undeclared War Against American Women, by Susan Faludi, and the "new feminism." (It also refers us to an article in Harper's.) Mull it over for yourself.

Also, that fine old lady is the writer Mary McCarthy, who, like Dolores Oh, did grow old.
Posted by Kathleen at 10:59 AM

I just have to say that I admire you for your close reading of work that isn't necessarily a favorite. I'm awed that you are sticking with the stories and finding things to make you question. I wish I did more of this, as it seems that you are rewarded by your perseverance. :)

Thanks, Sandy. So many people have admired and recommended Cordwainer and PKD that I thought I should give it a try.